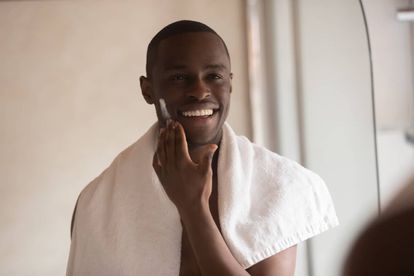 Articles point to men being more progressive about the way they look and how they groom. Terms like ‘man-scaping’, ‘man-kini’ and ‘bro-tox’ now exist as an attempt to further entice male patrons into an arena traditionally dominated by women.

In fact, there are now man-only spas with barbers, skin therapists and even tattoo artists, all dedicated to looking after top-to-toe male grooming.

Have South African men caught on to the trend?

In South Africa, where men are sent solo up mountains to find their manhood, rated on their braai-ing prowess and judged on their knowledge of contact sport – is the idea of entering a spa acceptable?

Themba Ndlovu, Clere For Men brand manager says we still have a way to go in this country to convince men that spa-based grooming is an acceptable pastime.

“South African men like to look, feel and smell good, but the idea of entering a spa, no matter how male-focused it is, still doesn’t sit well with the average guy.”

“As a brand, we support the trend for South African men to take part in more intense grooming experiences – it’s an international movement, and one I’m sure we’ll see more uptake of locally. It’s not just a youthful pastime either – males in their fifties are just as keen to keep their appearance in tip-top shape as men in their twenties are,” says Ndlovu.