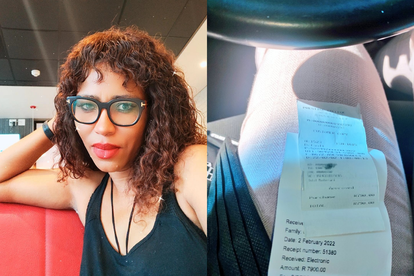 This woman has been praised for her good deed. Images via Twitter: @nubian6

This woman has been praised for her good deed. Images via Twitter: @nubian6

Not many people would do what this one woman did and this is why she has received high praise online. Taking to social media, the woman shared how a cashier at a Gauteng school had charged her R790 change instead of R7900.

After discovering the mistake, she quickly headed back to the school where the costly mistake occurred and paid the outstanding amount.

Whenever there’s a story about someone who did “the right thing”, people say, ‘Don’t praise a fish for swimming’. This saying is very unfair many times because not everyone does the right thing – in fact, people often go out of their way to do the wrong thing!

A young woman who goes by the Twitter handle of @nubian6, is one of those people who made sure that she did the right thing after she was charged R790 instead of R7900 for fees at Prestige College, near Hammanskraal.

Instead of treating the cashier’s mistake as a blessing or stroke of luck of some sort, she headed straight back to the school to rectify the situation.

Heading online on 2 February, she then shared photos of the receipts while explaining what happened.

While some shared that the school would have probably picked up on the mistake and contacted her, others praised her for doing the right thing straight away.

Read some of their interesting comments below:

“She was gonna get fired, God bless you more sister.”

“You are a life saver, imagine what would have happened to her for the shortfall. For that you deserve a follow bamba la +1 follower.”

“It’s a school, you literally had to pay because they would’ve picked it up. It’s not like a teller at a supermarket where they’d have to cover the difference.”