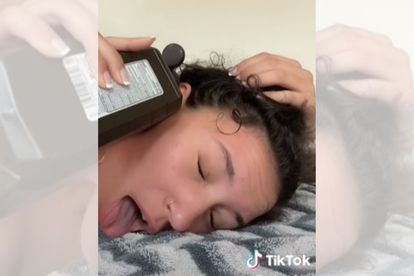 There’s a new health trend on TikTok and it involves cleaning out your ears using hydrogen peroxide.

But is the practice safe and should this become part of our regular hygiene routine?

A woman by the name of Ayisha Friedman-Negrín recently went viral after she poured peroxide straight from the bottle into her ears.

“This is how you properly clean your ears”, she says in the TikTok clip that has been viewed over 14 million times and kickstarted the bizarre trend.

The woman lies on her side to prevent the peroxide from spilling over. After it “sizzles out”, the woman flips over and the ear wax is expelled from her ear.

She also reveals the reasons she chooses not to use earbuds/Q-tips.“When you put the Q-tip in, you just make it go deeper, not cleaner,” she said

EXPERTS WEIGHS IN ON TIKTOK TREND – IS IT SAFE?

The TikTok trend has seen mixed reviews from experts. Some have defended the practise, whilst others warn claim you should first consult with a medical practitioner before

“I use peroxide in my office to assist with earwax cleaning almost every day. It’s generally safe to use in the ear canal”, ear, nose, and throat specialist (ENT) Dr Tonia Farmer told Buzzfeed.

The incorrect use of peroxide can be detrimental to your health, claim Medical News Today, and result in side-effects like dizziness, tinnitus, burns and blistering, pain and swelling and even a temporary loss of hearing!

If you’re feeling hesitant, fellow ENT Dr Sina Joorabchi also offers an alternative. “Use mineral oil or olive oil to soften your ear wax. Use a syringe to do this”.

If you are going to use peroxide to clean your ears, make sure you take note of the following…