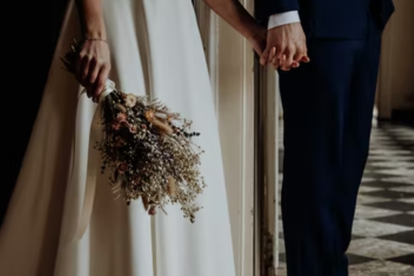 An angry groom exposed his bride’s cheating ways at their wedding. Images via Unsplash

An angry groom exposed his bride’s cheating ways at their wedding. Images via Unsplash

What is a wedding without a little bit of drama? One Asian couple may have taken things a little too far after the young groom exposed his cheating wife during the wedding reception. Surprisingly the drama didn’t end there as the couple proceeded to fight after the video played on a big screen shocking both the bride and groom’s family and close friends.

The clip has since gone viral on TikTok amassing millions of views and comments from social media users who appear to relish in the bride’s embarrassment.

Groom shows clip of wife cheating – at their wedding

One groom found the ultimate way to get revenge on his cheating bride and it was pretty brutal.

In a video that has gone absolutely viral on social media, the Chinese man and his bride can be seen approaching the stage at their wedding as their guests watch them.

While they stand there, a video starts playing on the big screen behind them that shows the young bride in bed with her sister’s husband.

“Didn’t you think I would find out about this,” the angry groom shouts at his bride who decides to throw her beautiful bouquet at him.

The angry groom then lunges forward before the clip ends.

“The groom played a video of his wife cheating on him with her pregnant sister’s husband in front of everyone,” the clip that first surfaced in 2019 was captioned.

Many people headed to the comment section to praise the man for exposing the woman.

Others wondered why he would waste so much money on a wedding ceremony.

“Why waste thousands if he knew? Satisfaction people. Embarrassing her in front of everyone was probably worth it for him,” commented one TikTok user.

“And SHE’S the one that gets mad at the end?” said another.