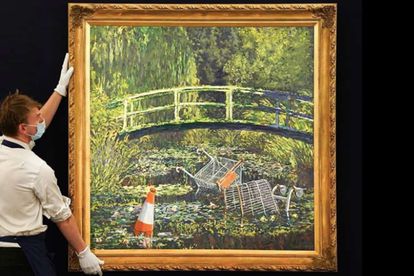 British graffiti artist Banksy has always been anonymous, but that may change now that a European Union (EU) court has ordered him to reveal his identity.

If the artist does not do this, he is at risk of losing his trademark on his work.

Banksy is the world’s most famous street graffiti artist and it’s hard to find someone who hasn’t heard his name. But how is it that no one has seen his face since most of his painting are in public spaces?

This would change if he complies with the court order.

In 2018, the artist was in the news after a notorious event at Sotheby’s Auction House in London. His piece titled Girl with Balloon was rigged to self-destruct by feeding itself through a paper shredder after purchase.

In a video Banksy posted on YouTube, titled Shred the Love, he showed the behind-the-scenes construction and the night of the auction.

The painting was auctioned off for  850 000 pounds sterling (around R1,78 million) and is said to have increased in value to £2 million (around R42 million).

Banksy has always disapproved of the selling of his artwork. In the past, he has ripped into the pretension of the
art industry.

‘Show Me The Monet’, asks Banksy

He is set to have another auction at Sotheby’s Auction House in October with a painting titled Show Me the Monet. This is a parody piece of Claude Monet’s Water Lillies and Japanese Bridge with garbage added to the scene.

The painting is set to be auctioned off on a livestream on 21 October 2020 and bidding is rumoured to start at 6 million pounds (around R126 million).

“Banksy is an incredibly intelligent artist; he is the master of the visual one-liner,” said Sotheby’s senior director Alex Bronzik during a press conference.

Banksy is now taking the fight to court thanks to a copyright lawsuit.

In 2014, Banksy and his company, Pest Control Office, successfully filed for trademark on his piece Flower Thrower. He created this art in Jerusalem, Israel.

However, this trademark has been revoked after the artist lost a court case against a greeting card company, Full Colour Black.

This company used an image of the Flower Thrower and stated that Banksy had essentially no rights on any of his work due to his anonymity, according to a report in the UK’s Guardian newspaper.

Full Colour Black also stated that Bansky has been creating work on private and public spaces with no prior permission, which makes the artist’s work public domain.

Banksy has since fought back and founded his own greeting card company in London, called Gross Domestic Products. He features all his work on this, including the Flower Thrower image.

Prove who you are, says EU

The European Union has ordered the artist to reveal and prove his identity in order to retain trademark on any of his work. However, no dates have been made public.

There are fans who believe that they have solved the mystery. These fans claim that Banksy is a street artist named Robert Gunningham who lives in Bristol.

Gunningham has often rejected the claims that he is Banksy. However, Gunningham was at the auction of the Girl With Balloon painting and there have been other clues to his true identity.

Banksy has recently been making headlines for his humanitarian work. In August of this year, he posted a video on his Instagram profile stating that he had purchased a military boat and named it the Louise Michel.

This vessel had been on the Mediterranean Sea rescuing refugees from North Africa set for Europe.

According to Banksy, the vessel is a necessity since EU officials deliberately ignore distress calls from “non-Europeans” breaking the European maritime law.

Banksy is clearly working to make a change and using his art as the vessel to do so.

For more information on the Louise Michel, visit the website at mvlouisemichel.org