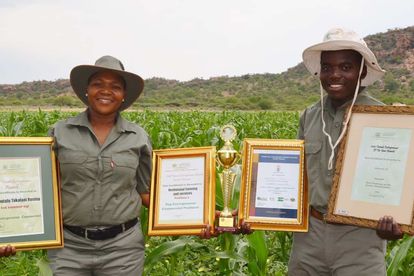 Female farmer Takalani Rosina Nevhutalu worked as a labourer on her brother’s farm for five years, but she knew she was made for more.

In her heart, Nevhutalu knew that she would one day become her own boss. Twelve years later, the former general worker is a successful female farmer and owner of a 25-hectare farm and has won several awards in recognition of her hard work.

Being a female farmer in a man’s world

She said hers is a true example that disadvantaged women can also stand up and contribute in the economic development of their communities.

“I come from a very poor family background and I know what poverty is all about. It has always been my wish to change my situation instead of waiting for the government to spoon feed me. I started from humble beginnings with no financial start up, but my hard work and zeal for success drove me to where I am today,” added Nevhutalu who plants tomatoes, chickpeas, maize, watermelons, butternuts and okra.

Even better news is that Nevhutalu’s farming project has created six permanent jobs for formally unemployed community members who are now able to feed their families. She added that she also employs up to 25 casual workers per year during harvest times.

“My permanent workers are fully registered according to the laws of this country. This is to encourage them to work hard because they know that they are part of my big family. A happy worker produces good results and always contributes to the development of the initiative,” she said.

Despite her success, Nevhutalu says there are also set backs that she faces on daily basis.

“The electricity costs for pumping water from the nearby river are very high. Pests like tuta absoluta are very dangerous if not well-treated. I spend a lot of money to make sure that these pests do not cause harm to my products. Besides that, my farm is adjacent to the mountain where baboons and monkey are in abundance. But all these challenges do not deter my determination because farming is in my blood,” she said.

The top female farmer, who sells her products locally and also packages to Pretoria, Durban and Johannesburg, said she is working on the acquisition of a global certificate so that she can also send her products to the rest of the world.

She also donates her products to local community members and crèches as a way of giving back to her own society.

And her message to the unemployed women out there is: “Wake up and create your own wealth. Don’t let poverty dictate your terms because you are the master of your own destiny.”