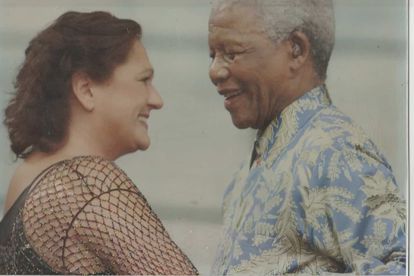 This year the Suidoosterfees and the Jakes Gerwel Foundation is celebrating Nelson Mandela Day with a special project.

On 17 July 2020, in collaboration with the Cape Town Music Academy (CTMA) and Die Burger, the festival released a special version of an Amanda Strydom’s A Child in a Faraway Land. Frazer Barry, Thandeka Dladla and Lumanyano “Unity” Mzi from the Unity Band perform with Strydom in the song.

About A Child in a Faraway Land

Amanda Strydom wrote A Child in a Faraway Land in 1994, the year of Madiba’s inauguration as president. She spent time with the statesman on numerous occasions.

“He taught me the meaning of true compassion and forgiveness,” she says.

Strydom’s thoughts are with fellow South Africans who are facing abject poverty on top of the pandemic.

Frazer Barry met Madiba in 1993 during the former president’s visit to the picturesque Genadendal. “I will never forget the moment. I was a matriculant and felt like a young South African at that moment that wonderful things are possible.

It was an honour to contribute through lyrics to this wonderful song of the legendary Miss Mandy.” Unity Mzi says that it means a lot to him to be working on a project that connects generations in keeping Madiba`s dream of unity and diversity alive. Thandeka Dladla adds:

“In a time when we are faced with so much uncertainty and where life as we know it has changed, it is an honour to be a part of a project that speaks honestly to our fears but encourages us to look forward to a better tomorrow.”

Vicky Davis, the producer and programme manager of CTMA, a non-profit company creating opportunities for contemporary musicians, says: “Amanda, Frazer, Lumanyano and Thandeka of the Unity Band each represent different generations, as well as various generations within South African music.

“They promote social cohesion through their work. The language of music unites people, and in this way, this adaption of Amanda’s song pays tribute to Madiba’s spirit.”

Jakes Gerwel, a founder member and former chairperson of the Suidoosterfees` board of directors, was a close friend and confidant of Nelson Mandela. During Madiba’s tenure as president, Gerwel served as his right-hand man and chief speechwriter.

With this music video for Nelson Mandela Day, the festival wants to focus on the power of words. Theo Kemp, executive director of the Jakes Gerwel Foundation, says: “Professor Gerwel and Nelson Mandela transformed the world through peaceful negotiations. The power of words to actually change the world, cannot be emphasised enough.”

The synergy between the festival and the foundation that acts as custodian of the late Jakes Gerwels’ legacy, had been taking place for many years. In 2020, Frazer Barry was appointed mentor of the songwriting development project, presented by these entities.

The five promising songwriters selected to participate in the mentorship programme will attend a three-week writers’ residency at the foundation’s Paulet House in Somerset East.

These up and coming songwriters will join the established singers of A Child in a Faraway Land (Nelson Mandela Tribute) to be part of a big stage production that will debut at Suidoosterfees 2021. The video gives a sneak preview of what audiences can look forward to in the production, to be produced by the CTMA.

Transforming the world into a better place

The initiative also promotes the idea heralded by the Nelson Mandela Day organisers, namely that every individual can contribute towards transforming the world into a better place.

Johann Maarman, Suidoosterfees board member and editor in chief of Die Burger, says: “Madiba selflessly sacrificed his own freedom to secure us the blessings of human dignity, peace and reconciliation. He was a beacon of hope and forgiveness. In challenging times South Africans could always find comfort in the shade of the big Madiba tree.”

A Child in a Faraway Land was originally included in the Amanda Strydom’s 2008 album, Kerse teen die donker. The new version was recorded at Sunset Recording Studios in Stellenbosch, by renowned bass guitarist and producer Schalk Joubert, also from CTMA.