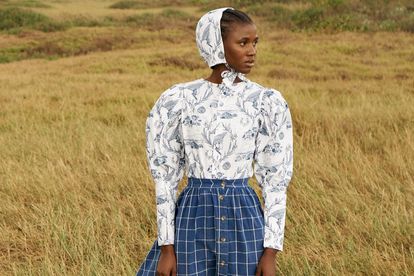 The birthplace of Italian fashion, Milan’s fashion week saw many presentations being digital due to the global pandemic, including designer Khumalo’s debut which featured a fashion film to showcase her collection and honour the life of Tubman.

Khumalo’s collection is entitled “Minty” named after Tubman’s childhood nickname. Harriet Tubman was an American abolitionist who used the underground railroad to free dozens of slaves after reaching her freedom in Philadelphia.

The fashion film features a model wandering through fields and farmland, reflecting the landscape that Tubman might have known as a child, as well as illustrations by Cape Town artist Shakil Solanki. Designs include tailored styles in hand-printed silk taffeta and handwoven cotton from Khumalo’s workshop in Burkina Faso.

Being in the spotlight is nothing new for Khumalo who was one of the joint finalists to share the €300,000 (R5.9million) LVMH Prize for Young Fashion Designers earlier this year, along with London-based Priya Ahluwalia.

Her previous collection highlighted the Egbado princess Sarah Forbes Bonetta, who was taken as a prisoner of war as a child and spent many years in the British Royal household under Queen Victoria. Her next collection will be inspired by South African activist Charlotte Maxeke.

When asked about the inspiration for her collections and how she decides on a theme, Khumalo said that as a black woman, she wants to make sure that they are also part of history.

“Harriet Tubman was my height — she was tiny — and freed 70 slaves. I want my kids to know that there were superheroes who were black and female and petite.”

Sindiso Khumalo says she chose Harriet Tubman as her inspiration for your Spring-Summer 2021 collection as she wanted to highlight the violence black women experience, and pay homage to specific black women from a specific time in history to ensure their stories are told.

“I want to educate people on black culture and black history, and I think it’s really important that I use my platform to educate and to bring hope as well. I feel like if I share these stories, people will feel like they can make some change, even if it’s small. It’s important for us to have these role models and talk about them because they are icons of our history.”

Khumalo worked with artist Shakil Solanki to create hand-printed designs that included details in the fabric and design that relate to Tubman’s life. Hand-printed designs of cotton plants reflect the cotton plantations on which she worked and the darkness of slavery that lay behind the façade of the beautiful plantations, the elegant homes, and the women who ran them.

The global pandemic has changed the face of fashion and this year, the fashion show saw the rise of the digital platform to showcase collections. Khumalo believes showcasing her collection via a fashion film had more of an impact that a runway show would have.

“I don’t think I could have made the same statement in a (runway) show. And that I think is the joy of everything slowing down — everyone has had to sit and watch and engage. Fashion week is a flurry — everyone’s going from show to show to show and you’re just hoping somebody sees your stuff.”

Khumalo collaborates with Embrace Dignity, an NGO that works with women in Cape Town who are former sex workers and places them in work that is safe and non-exploitative. The NGO trains women in crochet and hand embroidery, not only offering them a safe, non-judgmental place to work, but imparting a skill that they can also use themselves.

“I like to think of myself as a bit of a modern-day Robin Hood. I sell these luxury clothes and then try to make some kind of change within a community. I think people get overwhelmed and they feel like they can’t change anything, but I look at icons like Harriet Tubman and Nelson Mandela and I think you can make a change. You have to do something, even if it’s small.”

Khumalo studied architecture at the University of Cape Town, and after working with lauded architect David Adjaye in London, she went on to complete a Master’s degree in textiles at Central Saint Martins before returning to establish her label back in South Africa.