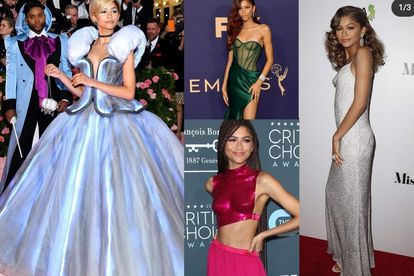 Zendaya scooped an Emmy Award on Sunday 20 September, but perhaps she should also be nominated for some kind of global fashion award…

The former Disney child star won an Emmy for best lead actress in a drama series at the 2020 virtual 72nd Emmy Awards ceremony.

She scooped the title for her role in Euphoria, but this sought-after actress is also known for her roles in blockbusters, such as Spiderman.

Zendaya on the red carpet

However it’s not only her acting career that keeps folks talking, but her fashion sense too. Here are a few of the 24-year-old Zendaya’s most memorable red carpet moments.

Zendaya took working from home to a whole new level at the 2020 Emmy awards. For her big night, she wore a gorgeous Christopher John Roger’s two-piece with a plunging top. She dazzled as she held her Emmy with family and friends celebrating her big win.

At the 2019 Emmy awards, Zendaya stole the show as a presenter in an emerald-green sheer corset dress by Vera Wang. She paired the stunning slit slip with matching green stiletto heels that complemented her long legs.

The shinier the gown, the better. And Zendaya did not fall short when she attended the Miss America pageant in 2016. She stunned in a sparkly spaghetti-strap dress by Michael Kors.

Zendaya is vocal about the racial social issues African-Americans face daily in Hollywood. They often are cast in roles that perpetuate racial stereotypes or are victims of anunfair pay gap.

She caused controversy when she arrived at the 2015 Academy Awards in a white Vivian Westwood gown with and Bob Marley dreadlock braids.

For the Met Gala, Zendaya and her team know how to dress to the theme. At the 2018 gala, the theme was heavenly bodies and she wore a Versace dress channelling Joan of Arc.

At the 2017 Met Gala, Zendaya arrived in Dolce & Gabbana printed dress the colour of fire. But the biggest accessory was her voluminous blown-out Afro.

At the 2017 Golden Globes award ceremony, Zendaya looked ravishing in the ruffled and tiered red lace dress. She paired the look with chandelier earrings and a sleek wavy hairstyle.

Reliving her Disney days, Zendaya arrived as a modern Cinderella in an electric, glow-in-the dark Tommy Hilfiger ballgown. She completed her look by bringing her stylist Law Roach along as her fairy godmother. It was a magical moment on the red carpet.

Fresh from the runway

Few celebrities wear gowns straight from the runway, but Zendaya does! On a trip to promote The Greatest Showman which she starred in, Zendaya stood out in a Moschino butterfly frock.