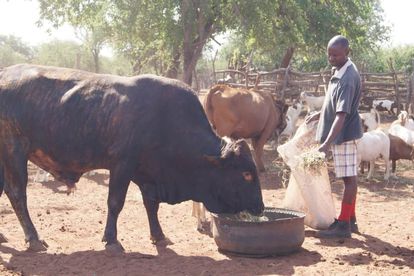 In the words of an emerging rural farmer, Israel Mamatho of Ha-Mukununde Tshamutavha village, outside Musina in Limpopo, “You can stand up and do something for yourself after losing a well-paying job.”

When Mamatho was still working at Exxaro Tshikondeni coal mine, he had a small piece of land where he farmed products for personal consumption. Little did he know that his interest in farming would become his full-time job when he lost his job at the local coal mine when it closed down in 2014.

After acquiring a five-hectare piece of land at his village, Mamatho registered his farming cooperative with another four family members. Today, Mamatho Agricultural Cooperative is the shining example of what hard work and self-reliance is all about.

Working the farm and making a success of it

Besides his four family members, Mamatho has three full-time workers who are on his farm’s monthly payroll and they are now able to put some food on the table for their families.

“Although I had a full-time job then, I had a dream that I would become my own boss one day. It was a blessing in disguise for me when we were informed that the mine was closing down its operations.

“While other colleagues were pondering about their future, I was excited that the time had come for me to realise my farming potential,” said Mamatho who farms indigenous chicken, guinea fowl, goats, sheep and cattle.”

Amongst his cattle and goats, Mamatho has special breeds for milk production.

He continued: “I am now preparing a certain portion of the farm because I want to venture into tomato, vegetable and animal feeds farming. I have realised that local people need a supply of tomatoes and vegetables in their doorstep. A wise farmer must always be ready for anything that happens. The animal feeds will help me and other local farmers when it is time for drought.”

Despite the current successes, Mamatho has challenges that needs to be resolved in order to put his rural farm to the next level.

“There is a very serious shortage of water in this farm. I have a small bakkie that I use to transport drums of water from my home to the farm every day. This is to make sure that all the animals have enough water to drink on daily basis. I use the same bakkie to transport my goats and sheep for stock auction at Mopane, a very far place from here.

“I also need my own tractor that will assist here in the farm every day. I need at least three boreholes and 10 big tanks to store enough water for everyday use in the farm. I plead to those responsible for funding small farmers like myself to come on board and assist me with the finances to cover all the shortcomings in my farm.”

Mamatho said he nearly gave up when he lost eight cattle during a drought season three years ago.

“As if that wasn’t enough, ten goats were stolen from my farm and I was depressed. But I had the courage to soldier on because farming is in my blood.”

Mamatho has a message for unemployed community members.

“It is never too late if you are not employed. There is no time for sleeping in this world of today. You can start your own initiative to make some income instead of waiting for the government to create jobs for you.”

He says he is willing to share his knowledge with unemployed community members who want to start their own small farms.