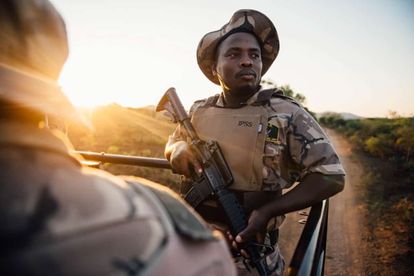 To ensure that these rangers are supported, SATIB Insurance Brokers and the Game Ranger’s Association of Africa teamed up to create Ranger Protect — a 24/7 death and disability fund which is driven by public donations and covers rangers across Africa, even when they’re off duty.

The positive impact Ranger Protect can have on an incident in the field was recently seen in Mozambique. On 3 July, Scout Muchanga was out on patrol with his team in the Niassa reserve, looking for snares, when he was injured by a buffalo.

Muchanga’s femur was smashed in the incident and he was taken to Mbamba clinic where he was stabilised and transferred to Mecula hospital before being flown out by SATIB 24 “Ranger Protect” to Lichinga hospital for advanced medical treatment.

“Muchanga had multiple fractures to his femur from the buffalo. With help from the doctors in Lichinga, Ambassador Air (MAF), Game Rangers Association of Africa and SATIB 24 “Ranger Protect,” they managed to fly Muchanga to Nampula,” a post on Niassa Lion Project mentioned. “Our managers have been in constant contact with him. It takes a village! Thank you everyone.”

On 17 July, Muchanga was released from hospital after a successful operation to pin his femur. With the help of the Ranger Protect insurance cover, Scout Muchanga was able get the help and support he needed to ensure a full recovery.

“The past months have been characterised by grave uncertainty in respect of our businesses, personal lives and health. Those working and operating in our wilderness areas have not seen travellers for the better part of this year, many have been without work, yet thankfully in most cases our rangers are holding post.

“So, it is with great comfort that we can provide these dedicate men and women with the security offered by #rangerprotect and that like Muchanga, they too have access to immediate care and assistance.

“SATIB remain unwavered in our commitment to ensure all rangers in Africa have access to these services, but it cannot be done on individuals’ donations alone. We need the commitment of reserves, lodge owners, concessions and the wildlife community at large to ensure we protect those who protect our wilderness areas and no day highlights this better than World Ranger Day,” said Andre du Toit, Director of SATIB Insurance Brokers.

There are estimated to be over 40,000 rangers in Africa.

“Rangers are the guardians of natural ecosystems that are critical to the health of our planet. The very least we can do for them and their families is to offer them adequate support whilst they are in the field. We call on organisations and individuals to unite behind Africa’s rangers and join us in supporting this critical cause,” said Andrew Campbell, Chief Executive Officer of the Game Rangers Association of Africa.

To date, worldwide over 1,000 rangers lost their lives in the line of duty in the past decade. According to records kept by the International Ranger Federation (IRF) and Game Rangers Association of Africa (GRAA), approximately 382 African rangers have died in the line of duty since 2012. These individuals have faced threats of armed poachers, militia groups, dangerous wild animals and community backlash.

You can lend a hand by sponsoring their insurance. When you consider that your $30 (R431) means a ranger and their family are protected for a year, it doesn’t seem like much at all.

The cost of each ranger includes: