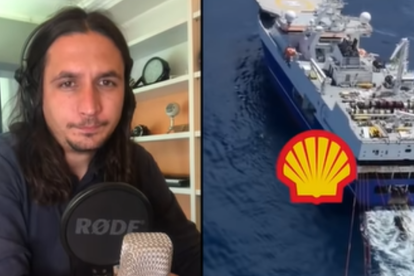 The Kiffness is one of thousands standing against Shell’s plans to blast through the Wild Coast. Image via YouTube: @TheKiffness

The Kiffness is one of thousands standing against Shell’s plans to blast through the Wild Coast. Image via YouTube: @TheKiffness

The Kiffness has joined thousands of people who are opposing Shell’s sonar blasting plan along the Wild Coast set to begin on 1 December.

The popular South African musician has written and performed a powerful protest song about the global oil giant’s sonar blasting plan that will potentially endanger the lives of thousands of sea creatures in its search for oil and gas.

The fight for the preservation of the Wild Coast sea animals is now also backed by The Kiffness. In his song that has since gone viral, The Kiffness stands up against Shell’s plan for sonar blasting along the Wild Coast in search of new oil and gas pockets.

His song is a remake of John Lennon’s Imagine and is titled Reimagine. In the striking song, The Kiffness highlights the negative impact the blasting will have on the ocean’s wildlife.

“No Shell on the Wild Coast.

“And no government ties.

“Imagine being a dolphin.

“Then Shell starts blasting for oil.

“And it ends up killing you.”

Greenpeace Africa has made an urgent court application to stop Shell from carrying out its blasting plans. The organisation is one of three environmental groups that are hoping the judge will side with them in the fight against the petroleum giant.

The environmental groups have argued that Shell’s plans will cause irreparable harm to bird and sea life, especially to humpback whales.

“They come out a lot of times where they kept on saying the economic interest shouldn’t be outweighed by the public interest as well as the environmental concerns that the public is raising.

“This brings to light the fact that because they have money and the financial power, they should go to any territory and do as they wish,” says Greenpeace Africa’s Happy Khambule in an EWN article.