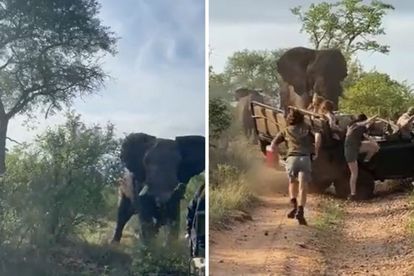 On Sunday, 28 November 2021, an elephant bull in musth damaged a safari vehicle on the Selati Game Reserve. Image: ItsGoingViral/Twitter

On Sunday, 28 November 2021, an elephant bull in musth damaged a safari vehicle on the Selati Game Reserve. Image: ItsGoingViral/Twitter

Footage of an angry elephant ramming into a safari vehicle has gone viral on social media.

Branding on the vehicle and rangers clothing shows that the footage was taken at Selati Game Reserve near Hoedspruit.

The footage – captured by a passenger travelling in a separate vehicle – was released in segments. The footage is currently making the rounds on both Twitter and WhatsApp.

EcoTraining also did confirm that nobody was injured, while also saying that the elephant bull was in musth in the following statement released on Facebook:

“Sunday 28 November 2021, an elephant bull in musth damaged an EcoTraining vehicle on the Selati Game Reserve.”

Musth refers to a periodic condition in bull elephants characterised by highly aggressive behaviour and accompanied by a large rise in reproductive hormones.

“On a routine activity, the EcoTraining instructors and trainees came across a breeding herd of elephants,” the statement continues. “The vehicle stopped to observe the elephants and give them a chance to settle down.

Keeping safe while on safari

“Once the vehicle had come to a standstill, the trainees were moved to the second vehicle that was parked in close proximity. Both EcoTraining instructors that accompanied the trainees have more than 25 years of experience in the field.

The General Manager of Selati Game Reserve, Mr Bryan Havemann, was contacted shortly after the incident and went to the scene to assess the situation.

EcoTraining said that all the people involved in the incident have received professional counselling after the incident.

The third video (down below) shows the extent of damage to the vehicle.