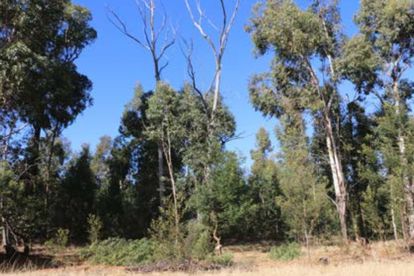 The Lehana plantation in Mount Fletcher is 89.44 ha and is currently a woodlot in need of a lot of work: Image: GCIS Vuk’uzenzele

The Lehana plantation in Mount Fletcher is 89.44 ha and is currently a woodlot in need of a lot of work: Image: GCIS Vuk’uzenzele

Trees, more especially forests play a significant role in climate change as both of these are inexplicably linked together. Research by the Nature Climate Change found that the world’s forests provide a “carbon sink” that absorbs 7.6 billion metric tonnes of carbon dioxide per year. These trees are able to absorb carbon dioxide when standing or regrowing and thus help reduce greenhouse gases. However, when the trees are cut down or deforestation happens, all of this carbon is released back into the atmosphere.

This is why historic plantation transfers back to the community that the Deputy Minister of Forestry, Fisheries and the Environment led on 30 June 2022 in the Eastern Cape are so important. Working with communities ensures that deforestation does not happen as communities are taught to harvest trees sustainably which also ensures that forests and plantations are able to help fight climate change.

Deputy Minister also planted trees at the Batlokoa Royal Place in Mount Fletcher in the Eastern Cape as part of the ten million trees programme, to signify the future growth of the plantations, the communities and to also signify the importance of trees in the plantation in the fight against climate change.

For years researchers and scientists have warned governments, politicians, industries and society as a whole about climate change and today, the environmental warnings of rising temperatures, extreme weather phenomena and more are being experienced all over the world including South Africa.

Some of the effects of climate change felt around the country in recent months include the recent floods which greatly affected the KwaZulu-Natal province as these floods damaged infrastructure, property and displaced thousands of people in the province. While other provinces such as the Northern Cape, Free State and Eastern Cape have been experiencing droughts with the Western Cape also seeing an increase in wildfires.

The South African government through the Department of Forestry, Fisheries and the Environment has committed to the 10 Million Trees Programme which is a project that aims to plant at least two million trees each year, for the next five years. This programme is a national call from the Presidency of the Republic of South Africa with the aim of attaining environmental sustainability and protection, and to realise socio-economic benefits for South Africans. The Department is calling on members of society, the private sector, government organizations, non-government organizations, schools as well as community based organizations take part in the planting of the Ten Million Trees by celebrating each milestone with a tree planting for the next five years.