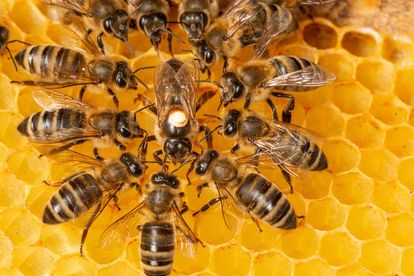 Form follows function. This is the principle that the design or shape of something – whether made by humans or in nature – should serve a purpose.

Honey bees’ function is to pollinate plants, make honey, survive and reproduce. Along with other pollinators – birds, moths, butterflies, bats and many more – they are the unsung forces behind much of what people eat, drink and even wear. Animal pollinators are said to contribute to the production of 87 global crops in 200 countries, including 30% of the world’s food crops. Their labours have been valued at around 153 billion euros.

But in one review paper, researchers suggest that at current rates of decline, the world will lose some 40% of its insect species, including bees, over the next few decades. Among the causes are widespread use of pesticides and habitat loss.

Bee colonies are collapsing around the world. In Europe, a 2012-2014 survey, the first of its kind, by the European Commission estimated that some countries were losing as many as a third of their colonies every year.

The threats to their survival make it urgent to understand the relationship between form and function in honey bees, particularly the sperm of the male bees (drones) – the “flying genitalia” of the bee world, as one researcher described them. That’s because of the way bees mate and reproduce.

Researchers around the world are applying the latest technologies to this project. One technique is computer-aided sperm analysis. This assesses sperm function (its vitality and movement) and its structural parameters. At the comparative spermatology group at the University of the Western Cape in South Africa, we have a particular interest in the structure and movement of insect sperm. We’ve now pioneered the use of fluorescent microscopy in combination with computer-aided sperm analysis for what we believe are superior results.

ALSO READ: KZN hitman arrested on Western Cape-bound bus – he had a rifle and 90 bullets with him

In addition to motility and velocity, our in-depth analyses provide data on, among other things, the swimming patterns of honey bee sperm. This fluorescent method shows promise and can, we argue, provide baseline data for future studies evaluating honey bee sperm quality.

This matters as we seek to secure the survival of honey bee colonies.

For now, South Africa and African honey bees appear to have been spared the colony losses seen in some parts of the world. This is thanks to the continuing use of traditional beekeeping practices, according to a 2012 report by the United Nations’ Food and Agricultural Organisation.

But the threat, as evidenced by the situation in Europe, can’t be ignored.

There is some urgency to understanding the sperm quality of the honey bee drones because of how long it has to last. Bee queens have limited mating flights. They fly to what’s known as a drone congregation area and mate with multiple drones before heading back to the colony. The queen can store some six million sperm in a specialised sac, the spermatheca, for as long as seven years. Any one queen bee can potentially have around 1.7 million offspring.

So, she needs the best and most resilient sperm she can get. And she will be choosy, shedding some sperm and keeping only what she likes. It’s not known how the queen decides which sperm is chosen or shed.

This is where form and function meet. Honey bee sperm has a very long tail, about 225 micrometres (µm) in length. It dwarfs the tails of the sperm of larger vertebrates, which are typically in the 40-75 µm range.

Why these long tails? Do they aid motility – how strongly and how fast the sperm moves? Are they relevant to the sperm’s longevity in the queen’s sperm sac? Do they determine which sperm the queen decides to hold on to and which to shed?

To answer these questions, we need the right technology.

Honey bee sperm are devilishly difficult to study, even with powerful microscopes and tried-and-tested techniques such as phase-contrast microscopy, a technique that allows more contrast in a viewed sample. This has much to do with the sperm’s form and structure. The tails are often tightly coiled in a helix, making it hard to tell which is the tail and which the head of the sperm. Both have about the same width.

Other studies of sperm motility and kinematic parameters – broadly, the direction and range of movement – have tried to work around these blind spots, but at the expense of thorough analysis.

Our research group has adapted and stacked existing technology to study the sperm of the black soldier fly and the Cape honey bee.

In our first published paper about this work, we explain how we have improved on other sperm analysis systems by using fluorescence. This has also been done successfully in studies of human sperm. Only sperm heads fluoresce – glow brightly – so it is much simpler to distinguish head from tail.

This has allowed us to glean useful insights into sperm concentration among drones. We’ve also been able to confirm the three swimming patterns of sperm: moving in single helices (wound-up), progressively forward snake-like swimmers, and what we describe as groups of helical swimming sperm (as compared to the individual helical swimmers).

Sperm quality has also been put forward as a cause of colony collapse. This sort of research broadens our understanding of sperm quality’s importance for colony health and performance. Researchers elsewhere have suggested that drone quality (which we believe includes sperm quality) and variability in a colony or apiary can be a useful indicator of queen and colony health. It can therefore also be used to identify the effect of, for example, environmental stressors.

Assessing sperm quality as part of drone quality will allow for early detection of such stressors. That will allow for preventive management strategies to avoid colony deterioration.

We still have much to learn about honey bee sperm and colony collapses. But if it means we can aid beekeepers to track colony health, for instance, perhaps we can help to secure the future of this critical pollinator.

The research on which this article is based was co-authored by Master’s student Janice Murray. Mike Allsopp of the Agricultural Research Council helped to collect data in the field.