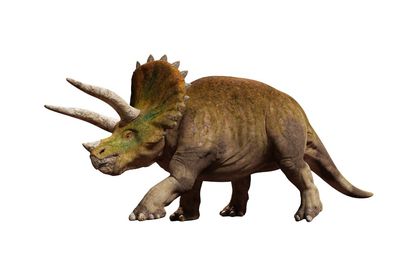 Dinosaurs have captured people’s imaginations more than any other ancient creatures These reptiles – some large, some small; some carnivores and others herbivores – rose and dominated the world’s landscapes for more than 135 million years during a period known as the Mesozoic.

Today, dinosaur fossils can be found in many parts of the world, contained in rock successions. These are a series of strata or rock units in chronological order. South Africa and Lesotho’s main Karoo Basin, for example, contains plentiful dinosaur fossils in the rock succession that formed between 220 million and 183 million years ago during the Late Triassic-Early Jurassic period. These ancient remains include body fossils (bones) and trace fossils, which are markings in the ancient sediments in the form of footprints and burrows in the ground.

Body fossils can assist in recreating the ancient life forms, understanding what they looked like, their size, and even how they grew and evolved. The problem is that intact body fossils can be rare in some areas. Bone fragments alone cannot help scientists to piece together the puzzle of ancient life. The traces of animals offer another avenue of study.

In the main Karoo Basin, bone fossils of carnivorous dinosaurs called theropods are incredibly scarce. But their footprints, preserved in the rocks during the Late Triassic and Early Jurassic, are abundant. These fossil footprints are a treasure chest of information. They can reveal what organism made the tracks – different animals have different footprint shapes. They offer clues to the creature’s behaviour – hopping on two legs would leave a different footprint pattern than walking on four. They also provide evidence about the substrate conditions when the creature walked, such as whether it sank into wet sand or was standing firmly on dry gravel.

ALSO READ: Motorists warned to AVOID these roads near Thembisa

In a recent study, our team looked at around 200 footprints attributed to theropods across a time span of about 35 million years. We wanted to understand how dinosaurs’ feet changed through time in southern Africa. The time interval we studied is critical in dinosaur history because it captures a mass extinction event and the ancient ecosystems’ subsequent recovery period.

Our findings reveal that over time, our local theropods became larger and had a greater diversity than what the body fossil record could suggest.

We know the shape of their feet and how they moved from reconstructions based on theropod body fossil material. Scientists have also learned about these aspects of dinosaurs by making modern footprints using their closest living relatives: birds.

Once we identified the theropod footprints in the field, we quantified their footprint shape by measuring a set of standard parameters agreed on by the global dinosaur trace fossil scientist community. Based on these measurements across time and space, we were able to draw conclusions about theropod foot and body size evolution. This is possible because there is a direct link between foot length, and therefore footprint length, and body size (specifically hip heights and body lengths).

Our study recorded a 40% increase in the maximum and average footprint length in the studied time interval of 35 million years. Furthermore, we observed that larger bodied theropods were present, though rare, in the Late Triassic and that they became even larger and more common in the Early Jurassic, during the recovery period following the mass extinction event.

These observations echo trends recorded elsewhere in the world. We also observed that through time, theropod footprints became more prevalent. This may suggest that the carnivore population thrived during the recovery period. This change in abundance might, however, also have been influenced by changes in the ancient environment from meandering rivers with lushly vegetated floodplains to shallower ephemeral streams and lakes under dryland conditions. This newer setting is more conducive to preserving footprints because deposits in the soil are less likely to erode.

Based on our measurements, we identified three distinct types of footprint shapes that may be attributed to the three different theropods that roamed the landscape in the Early Jurassic. This means that southern Africa’s theropod footprint record reflects a greater theropod diversity than the scant carnivorous dinosaur body fossil record, which only preserves fragmentary material of two theropods, Dracovenator and Megapnosaurus.

Another key finding centred on changes to the form of theropods’ footprints. One is that the forward projection of the middle toes (how much further forward it is than the outer two toes) decreased over time. Another change is that small local theropods had shorter middle toe projections than their contemporaneous North American equivalents.

These observations require more investigation to better understand what these changes mean, especially because the middle toe projection has been linked to an animal’s running ability.

Our research illustrates the importance of the understudied fossil footprint record in studying ancient life and how it complements the more explored body fossil record. Make no bones about it: evolutionary changes among southern African dinosaurs can be tracked by examining their footprints.