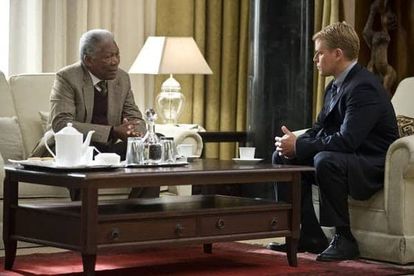 Morgan Freeman in his now iconic role as Nelson Mandela

Morgan Freeman in his now iconic role as Nelson Mandela

It’s one of the most attractive, yet challenging roles for an actor. Getting to play Nelson Mandela is one of the greatest offers stage professionals can get.

However, we all know that Hollywood’s relationship with South African accents is a challenging one. This is a country of 11 different official languages, how is it possible for an outsider to channel that into one vocal imitation?

However, when you’re the best, there is nothing to fear. That is certainly the case with these eight actors. All of them do justice to the man whose life became more heroic than any cinematic tale. There’s a few surprise names in here, and even a bonus Michael Caine cameo to enhance this list of legends.

Eight Actors who were brilliant as Nelson Mandela:

We believe Danny Glover is the first major superstar to play Nelson Mandela, in the 1987 movie ‘Apartheid’. It was a TV movie, but was perhaps befitting of a run on the big screen instead. Critics adored Glover’s portrayal of a still-jailed Madiba, awarding him a Primetime Emmy Award for his work.

Not many clips exist of this 30-year old flick. But you can catch a French dubbed version in YouTube if you’re desperate to see Sergeant Murtagh channel his inner Nelson. In the meantime, here’s Glover talking about his love for South Africa:

Once you get over Michael Caine as F.W De Klerk, this a brilliant watch. Poitier and Caine have excellent chemistry as the two leaders who negotiated the termination of the apartheid regime. Poitier plays Mandela over a 40-year period, but constantly appears as his own age.

However, this minor blip wasn’t enough to stop him earning SAG, Primetime Emmy and Satellite nominations for his turn as Mandela. This trailer will give you a better idea of how good Poitier was as the former president:

Was this the most famous portrayal of Nelson Mandela? Much like Michael Caine is the victim of his own unmistakable tones, Morgan Freeman is both blessed and cursed with his wonderfully consistent voice.

Issues with accents aside, Freeman does very well to capture the immense quiet dignity of Madiba. Not only was he was recognised with an Oscar nomination for the role, but Mandela himself was delighted with the portrayal. In some ways, that’s better than any Oscar on your mantelpiece, right?

Clarke Peters is one of the hardest working actors on TV, and has spent 25 years working on various projects. He’s one of the silver screens more recognisable faces. In fact, he’s so good, he played Nelson Mandela twice in four years, in two different movies.

Both focus on different parts of Mandela’s life – Endgame looks at the fall of apartheid, whereas The Prison Years… come on, you can guess that one. Funnily enough, Peters will be in a third Mandela-related project next year. However, ‘The Mandela Effect’ is more about theoretical science than Madiba. Hmm.

On one of the rare occasions where Madiba plays second fiddle, David Harewood captures the essence of a man who yearns for freedom and a future with the love of his life.

This is one of the most emotional retellings of the Nelson and Winnie love story. The BBC knocked it out of the park with the script, the casting and the atmospherics. It’s another Mandela-based film that’s flew under the radar.

Lightning struck twice in 12 months. This time, Terrence Howard takes on a supporting role. He’s alongside Jennifer Hudson, who leads as Winnie. Both performances are incredibly strong, and Howard does a superb job charting the emotional strain that both of their prison sentences put on their relationship.

Former The Wire and Luther star Idris Elba put in a powerhouse performance as Madiba, in the first film to be based on his autobiography.

We’d go as far to say that this film is underrated. It’s a beautifully shot piece of cinema with a role that suits Elba perfectly, and a supporting cast that gives a fantasic energy to Mandela’s life story.

Fisburne actually defied expectations in this role. He probably doesn’t have the right physique to be Mandela, but you can’t blame a guy for keeping in shape.

His casting was perhaps to draw a darker side of a pre-revolutionary Madiba. It works brilliantly, as Fishburne expertly balances controlled aggression with overwhelming frustration.