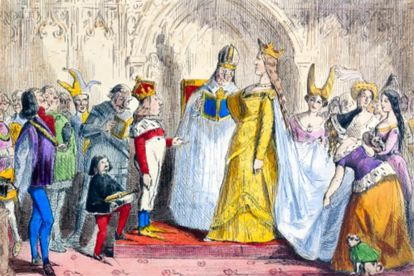 Did you know Mary, Queen of Scots was just six days old when she became Queen? She’s not the only one in history (and presently) to take the throne at a very young age. While it might have been a distant dream for many of them, the following Royals got a whole lot more than they bargained for while they were very, very young.

Royal Wedding Anniversary: 13th October For the people of Bhutan, our King and Queen embody Dignity and Grace, and all that is sacred and cherished in Bhutan. In Their Majesties’ tireless work that emanates from abiding love and care for the people, we find a fountain of inspiration. On the Royal Wedding Anniversary, our humble offering is a rededication of our body, mind and spirit towards building the great, prosperous nation that His Majesty envisions, and our wish that this wonderful country is forever blessed by Their Majesties’ benevolent guidance. ??? #Bhutan #RoyalWeddingAnniversary

While the rest of the world was busy paying attention to the marriage of Prince William and Kate Middleton in 2011, the Kingdom of Bhutan named their new queen at the age of 21. Now,this young queen is only 27 years old and considered to be the youngest reigning queen in the world at the moment. Travel and Leisure reports that she gained her title in 2011 when she married Jigme Khesar Namgyel Wangchuck, otherwise known as Bhutan’s “Dragon King”. Of his wife, the king told reporters: “I have been waiting for quite some time to get married. But it doesn’t matter when you get married as long as it is to the right person. I am certain I am married to the right person.”

Africa| Uganda| Africa | "Uganda's King of the Tooro Kingdom, King Oyo Nyimba Kabamba Iguru Rukidi IV, during his 18th birthday and coronation celebrations in Karuzika Royal Palace at Fort Portal. King Oyo is one of the world’s youngest ruling monarchs. He ascended to throne at age three after his father, King Olimi Kaboyo, died of a heart attack in 1995. He rules over more than 2 million people in the Tooro kingdom, one of four kingdoms allowed by the government to exist in Uganda" | © Benedicte Desrus || #AfricanKing #youngestAfricanking #king #royalty #africanroyalty #africanhistory #history #uganda #toro #blackkings #africanthrone #QSF #QueenSabaFashion

At the age of three, Oyo became the youngest monarch in the world in 1995. He actually slid off the throne and ran away when the ceremony began (he was just three). Presently Oyo still rules the Tooro Kingdom, a south-western patch of Uganda.

Ivan VI was crowned Tsar of Russia When he was two months old and unfortunately, it didn’t last long. Scarcely a year later his first cousin twice-removed, Elizabeth, seized the throne in a coup, ruling thereafter as Empress of Russia. He went on to spend 20 years in solitary confinement and was later murdered at the age of 23 by his jail guards.

Alfonso was monarch from birth as his father, Alfonso XII, had died the previous year. His mother, Maria Christina of Austria, served as regent until he assumed full powers on his sixteenth birthday in 1902 from where he ruled until the proclamation of the Second Republic in 1931.

Happy birthday to the Egyptian Museum in Cairo?. The museum celebrated the 115th anniversary of its establishment this week, displaying for the first time some 60 golden pieces of the chariot of King Tutankhamun among its thousands of other artifacts. Here, a man views the golden sarcophagus of the Pharaoh Tutankhamun, on display at the Egyptian Museum in the Cairo on November 28, 2017. Picture by AFP/Getty Images #egypt #cairo #museum #egyptmuseum #kingtut #kingTutankhamun #Tutankhamun #anniversary #history #africa #egyptian #egyptianmuseum #birthday #historical #artifact #mummy #gold #golden #tourism #tourist #tourists #travel #letsgosomewhere

Tutankhamu is probably more famous for his death than anything else. According to Insider, he became the King of Egypt when he was 8 years old and reigned during 1333 BC. He died ten years later due to unknown reasons though. His intact tomb was discovered in 1922 in the Valley of the Kings which is said to be “one of history’s most important archaeological achievements”.

Henry VI is the youngest person ever to succeed the English throne. He was 9 months old when he succeeded his father as king of England in 1422. Two moths after that, he became France’s King as well (even though the latter didn’t last long). When he began ruling on his own, two rival royal houses began a power struggle for the throne: The Lancasters (Henry’s house) and the Yorks. The struggle became known as the War of Roses, and Henry’s side eventually lost. He was later imprisoned and murdered in the Tower of London at age 50.

Christina reigned as Queen of Sweden from 1632 until her abdication in 1654. At the age of six, Christina succeeded her father on the throne upon his death at the Battle of Lützen, but began ruling when she reached the age of 18. She is considered to be one of the most educated woman of the 1600’s. Her father apparently raised her as a boy. According to History Today, her abdication at the age of twenty-seven stunned everyone and she went on to move to Rome and annoy the Pope, angle unsuccessfully for the throne of Poland, collect paintings and act as a munificent patron of music and the arts, support Scarlatti and Corelli and Giovanni Bernini, found the Academia dell’ Arcadia for literature and philosophy, and write her autobiography before dying in her Roman palace in 1689 at the age of sixty-two.

China’s last emperor was one of its youngest. In 1908, Puyi became emperor at two years old and the twelfth and final ruler of the Qing dynasty. When Puyi was only six years old, a revolution erupted and the Chinese dynasty crumbled.