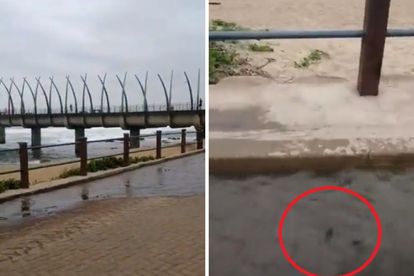 A clip of faeces floating in a sewage spill into a Durban beach has gone viral.
Images via Twitter
@ME_Beaumont

A clip of faeces floating in a sewage spill into a Durban beach has gone viral.
Images via Twitter
@ME_Beaumont

Durban beaches and December go hand in hand – after all, what is the festive season without a trip to the city’s famous golden mile?

But residents and visitors to the coastal city have been left with a foul taste in their mouths after a video of the filthy beaches went viral on social media. This, after the local municipality, announced that beaches would officially open on 1 December following closures relating to concerns of water quality.

DURBAN BEACHES TO OPEN IN DECEMBER

Speaking to the media, eThekwini Mayor Mxolisi Kaunda shared the news that Durban beaches would be open to visitors from Friday 1 December.

The city’s tourism sector has taken a hard knock after dozens of local beaches closed over several months following a sewage spill due to damage in the infrastructure network. This resulted in high levels of E.Coli detected in the water. On some beaches, sewage itself was seen floating in the water.

ALSO READ: VIDEO: How to spot and avoid rip currents at the beach

According to the mayor, a limited budget – used in repairing infrastructure from KwaZulu-Natal flood damage in April – resulted in beach safety taking a backseat.

He said: “We are working with limited resources, which are inadequate to cover each and every space where damage has occurred in the city.

“We have opened a number of beaches in the city and we only remain with four which we are working tirelessly. Come 1 December, all our beaches will be up and running.”

As of Thursday 24 November, 10 beaches currently remain closed in Durban, according to the eThekwini Municipality’s website. They include: Westbrook, Bronze, Laguna, Thekwini, Umhlanga, Umdloti, Winkelspruit, Ansteys, Reunion and Country Club.

With news that Durban beaches will open to the public come December, Twitter users shared their thoughts.

And many were disgusted after tweeps posted clips of what appeared to be faeces floating near a beach in Umhlanga.

@Sakhilemngadi: “Mxolisi Kaunda opening Durban Beaches despite uncertainty and risking lives is completely irresponsible. If this mayor isn’t absent he resurfaces with decisions that are not thought out!”

@dwaine_van: “You need your head PROPERLY read if you want to risk your children’s health on these Durban sewage beaches”

@JackD157: “Perhaps the mayor would care to put on his trunks, jump in and show us how safe it is? Talk is cheap”

@Peterman43: “On Durban’s beaches, the Minister of Health should step in”