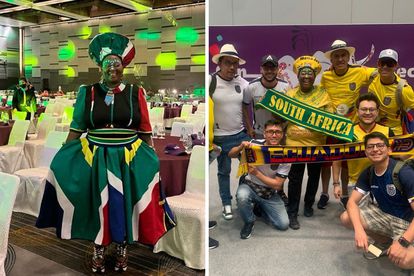 Mama Joy has been sharing her adventures at the Fifa World Cup in Qatar.
Image via Twitter
@JoyChauke5

Mama Joy has been sharing her adventures at the Fifa World Cup in Qatar.
Image via Twitter
@JoyChauke5

South Africa may not have qualified for the Fifa World Cup in Qatar, but its superfan Mama Joy is not only representing our country but the African continent at the football tournament.

The die-hard soccer fan – real name Joy Chauke – is currently in Qatar after scoring a special invitation from the Fifa Fan Network.

MAMA JOY HAS A BALL AT THE WORLD CUP

Decked in her green and gold regalia – and proudly showing off her SA flag – Mama Joy has been having a ball at the World Cup.

The football fanatic was one of several special guests from around the world invited by Fifa and Qatar’s Supreme Committee.

The fans are being treated to the World Cup experience and the opportunity to mingle with other zealous soccer lovers from all over the world. According to Sunday World, Mama Joy was selected to represent the country by the SA Football Association.

Mama Joy and the rest of the VIP guests are being homed in posh hotel rooms for the duration of the World Cup. They’ve also scored invites to several fan festival celebrations. And to top off the exciting experience, Mama Joy bragged about taking home the award for “best superfan” at the Fifa Fan Leader Network awards.

But despite her jovial persona, Mama Joy expressed her sadness about not having SA’s national team at the World Cup.

She told Sunday World: “I am very disappointed that Bafana Bafana are not there. I feel sad because it feels like I will be supporting other supporters to support their nations.”

When Mama Joy isn’t supporting her national team or representing Africa, the soccer lover is backing the local premier league Royal AM, owned by Shauwn Mkhize aka MaMkhize.

But it wasn’t always this way. Once a diehard Orlando Pirates, Mama Joy left behind the premier league team in support of MaMkhize’s Royal AM.

“I realised that she loves soccer and had her ambitions set on playing in the Premier Soccer League (PSL) when she acquired the status of Bloemfontein Celtic and that kind of passion and purpose really clinched it for me”.

Today, Mama Joy travels first-class in style alongside MaMkhize and her crew to all Royal AM matches. She also dons a custom regal outfit adorned in Royal AM’s colours- black and gold.