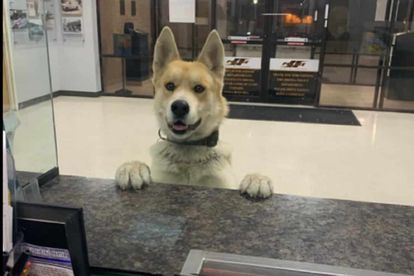 A dog recently “reported himself missing” at a police station in Texas, United States.

The Support Our Permian Basin Police Officers Facebook page revealed that the pooch just strolled into the station and “reported” to the front desk.

It is reported that Sergeant Rusty Martin was on hand to welcome the dog, named Chico, to the station. He was part of the team who processed the pooch and kept him entertained while they figured out what to do.

And while Chico had a collar on, his ID tag had fallen off. The team at the station called in Animal Control to look for a microchip, though before they arrived, things took another surprising turn.

“We’re thinking he wanted to apply for a K9 position after eliminating a Lassie-type situation,” the post read. “He was given lots of love and attention until he decided it was time for him to leave. He let himself out and after an exhausting search, was not found. We were relieved to learn he safely returned to his owner.”

After seeing the police department’s post the next day, Chico’s owner, Edward Alvarado, contacted them to tell them that he had in fact returned back to where he belongs.

Chico’s owner apparently only knew what had happened when his nephew sent him a text message after seeing pictures of his pet on social media.

“‘He asked me, ‘Is that Chico?’ I came outside and checked. But he was there already. That’s kind of cool. He knows where to go!”

“How cute is this? I’m sure the officers loved this. What a handsome applicant…I’ll hire him,” said one social media user.

“How adorable! He would make a good recruit!” said another.