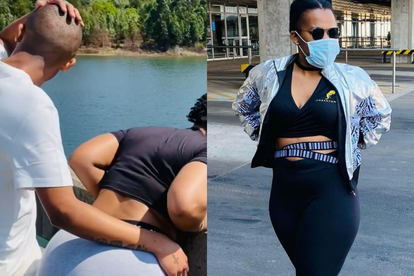 South African exotic entertainer Zodwa Wabantu has finally found herself a new young man. Just a few weeks earlier the dancer was complaining about losing her side dish Thabo “Smol” from Black Motion but it seems she has found herself someone else to keep her busy this springtime.

Zodwa Wabantu has a new man

Mzansi’s favourite nudist Zodwa Wabantu appears to be off the market after a long wait to find someone who could replace Black Motion‘s Thabo.

The 35-year-old has been giving us snippets of the man in various Instagram posts and judging from the very cleverly taken snaps, he is young and handsome – just the way Zodwa prefers.

One of the clips of the two of them cuddling, while Zodwa smothers him with kisses in bed, is captioned: “I don’t flirt, I take it if I want it. It’s not a relationship, it’s a feeling.”

Another one shows them spending some time under the sun by a dam.

In a viral episode of Lasizwe’s Drink or Tell the Truth, Zodwa revealed that she was indeed seeing someone and we think this is the someone she was referring to. Speaking to Lasizwe she said that he is not famous and has a regular 9-5, she also said that the two of them spent lockdown together.

ALSO READ: ‘Woza Thabo’: Zodwa calls her ‘side dish’ to keep her warm

“Right now at home there is a Ben 10, He is not famous, he works I have been in lockdown with him. I love sex, I have everything, I love cuddling, I love having somebody at home. Imagine having a big house like this but you are alone,” she tells Lasizwe.

She also casually mentions that he has a girlfriend but it doesn’t bother her.

The dancer once again found herself the topic of the day. This after a video clip of a man touching her private part was started circulating online.

In the video that was taken on an unknown date, Zodwa can be seen performing at a party while a number of people dance and drink around her. Not long thereafter, a man puts his hand inside her underwear but is quickly pushed away by both Zodwa and what appears to be a security guard who is standing nearby.