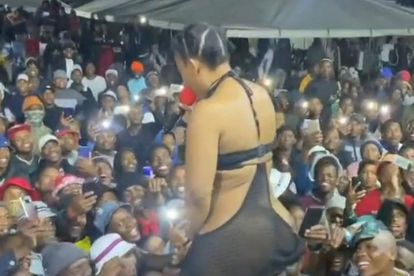 Not for the first time, a video of Zodwa Wabantu being groped by male fans has gone viral…

But this time, the singer and entertainer courted controversy for not only allowing the incident to take place during a performance, but for removing her underwear on stage prior to it occurring.

It’s unsure where or when the incident took place in the clip where the Durban dancer was seen teasing the packed crowd by removing her G-string, which she wore under a sheer dress.

Tweeps also posted clips of Zodwa allowing a throng of men to grope her after she removed her underwear.

And many were disgusted by what they saw…

“This is disturbing,” posted one tweep.

It’s not the first time a Zodwa Wabantu groping video has gone viral – in 2019 the star was slammed after she condoned the behaviour of four men who groped her on stage.

“They are my fans, there was no abuse whatsoever, and no harm was done,” she told TshisaLive.

And just last year, Zodwa poked fun at a fan who almost fainted after touching her bare bum

“You can have Your talent, I have Power,” she posted of the incident.

Meanwhile a clip of Zodwa slapping a male concert-goer has come to light.

The video shows the entertainer’s male bodygaurds pull the man out the crowd after which they repeatedly slap him. Zodwa then approaches the fan where she swears at him in isiZulu before slapping him several more times.

According to tweeps, the man reportedly threw alcohol at Zodwa, which angered her.

“Apparently this guy poured Zodwa with alcohol he did not touch her or whatever y’all think,” said one tweep.

Others called on the man to press charges against the dancer and businesswoman.

“This guy must get a lawyer,” posted one tweep. Another added: “Imagine if Zodwa was a man and that boy was a woman y’all would be saying Zodwa must Fall … I don’t care who says what this is GBV.”