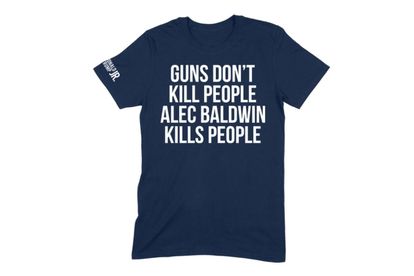 Donald Trump Jr is under fire for selling graphic T-shirts with the words, “Guns do not kill people, Alec Baldwin kills people”.

The 45th president of the United States, Donal Trump’s son is selling the graphic T-shirts on his website for $27.99 (R412). The shirts appeared online after the actor, Alec Baldwin accidentally fired a prop gun on a movie set that killed cinematographer Halyna Hutchins and injured director Joel Souza.

Trump Jr also took to his Instagram to share a meme that said, “Let’s all watch Alec Baldwin blame the gun” with the caption, “It’s only a matter of time”. Last week he posted a meme with the caption, “That look when an anti-gun nut kills more people with a gun than your extensive firearm collection ever has”.

The New York Daily News has since slammed Trump Jr as the “SPAWN OF HATIN’” on its front page released Tuesday, 26 October. However, Trump Jr rejected criticism of his actions in an Instagram story, saying: “Screw all the sanctimony I’m seeing out there. If the shoe was on the other foot Alec Baldwin would literally be the first person pissing on everybody’s grave trying to make a point. F*ck him!”

Feuding with the Trump family

According to The Hill, Baldwin parodied former President Trump for years on Saturday Night Live, feuding with the wider Trump family throughout the Republican’s presidency.

Firearm regulations in the US

It is said that Baldwin has also been an advocate for firearms regulations. Soon after the incident Baldwin took to Twitter to share a statement and said his “heart is broken” at the tragic incident and that he is fully cooperating with police officials.

A recent report also stated that Baldwin was practising drawing his gun across his body and pointing it at the camera when it went off, killing cinematographer Hutchins, according to an affidavit released.