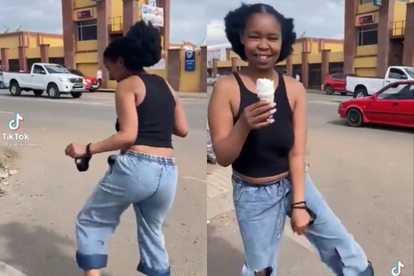 Zahara enjoying a little dance and some ice cream . Image via TikTok: Zahara

Zahara enjoying a little dance and some ice cream . Image via TikTok: Zahara

Zahara can’t seem to catch a break online. Whenever she is seen having fun either out with her friends or even enjoying ice cream, people wonder whether she has been drinking. Another clip of the singer has been circulating online of her dancing in a street and now people are accusing her of being under the influence.

Last year, Loliwe singer Zahara went viral after a clip of her drunkenly singing while enjoying the company of her friends was shared online. A short while later, people accused her of performing while under the influence of alcohol because of another viral video.

In the past, the singer revealed that fame had caused her to develop a drinking problem. In the same breath, she explained that she was not an alcoholic and would like people to stop associating her with alcohol.

Despite this, she is currently trending on South African Twitter as people discuss a clip of her dancing in a street while enjoying a nice ice cream cone.

One Twitter user @_LeratoMabuza uploaded the video to the app which she captioned:

“When you have time, leave alcohol alone”

The clip quickly got shared by many Tweeps who either agreed that Zahara looked drunk or defended the singer. Some questioned the fact that unfair assumptions were being made about her. Read some of their comments below:

“If she was drunk, I doubt she would’ve put the clip on TikTok for the whole world to see. Sis is just enjoying herself, let her be. Thank you.”