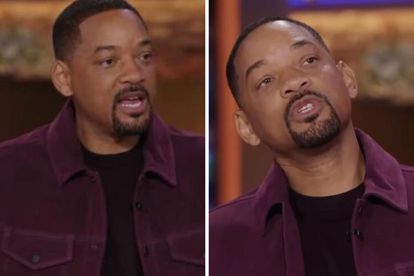 Will Smith reflected on the night he slapped Chris Rock at the Oscar’s during a sit down interview with Trevor Noah on The Daily Show.
Images via YouTube
screenshot: The Daily Show

Will Smith reflected on the night he slapped Chris Rock at the Oscar’s during a sit down interview with Trevor Noah on The Daily Show.
Images via YouTube
screenshot: The Daily Show

For the first time, Will Smith is getting candid about one of the bombshell moments from 2022 – slapping Oscar’s host Chris Rock. The award-winning actor sat down with The Daily Show host Trevor Noah to discuss what really led to the viral moment…

ALSO READ: August Alsina ‘comes out’ after affair with Will Smith’s wife [watch]

In February, Will Smith made headlines around the world when he walked up to Oscar’s host Chris Rock and slapped him across the face. This, after the comedian made a joke about Will’s wife Jada Pinkett Smith who sported a bald look as a result of her struggle with alopecia.

Will later issued an apology to Chris Rock as well as his actions, but has somewhat stepped back from the spotlight ever since.

ALSO READ: Will Smith hopes the ‘slap’ will not punish his ‘Emancipation’ team

Chatting with Trevor Noah on The Daily Show, Will revealed what he had learned from the experience.

He said: “That was a horrific night, as you can imagine. There are many nuances and complexities to it. But at the end of the day, I just lost it”.

He added: “You just never know what somebody is going through…I was going through something that night. Not that that justifies my behaviour at all. We just have to be nice to each other”.

“The thing that was most painful for me was that I took my hard and made it hard for other people…hurt people hurt people”.

Will Smith added that “a lot of things” led to the Oscar’s slap that had everyone talking.

He continued: “It was a lot of things, it was the little boy that watched his father beat up his mother. All of that just bubbled up at that moment. That’s not who I want to be …”

“That was a rage that had been bottled up for a really long time!.

Will Smith added that he regretted the “horrific decision” and hoped that black entertainers would not be “tainted” by his actions.

Meanwhile, Will Smith revealed that apart from his upcoming movie Emancipation, he has been busy filming a series with the TV channel Nat Geo about travelling the world.

In the series, titled Pole to Pole, Will travels from the South to the North Pole over a period of 100 days, making stops in various countries in between.

The series marks the actor’s third travel series for the adventure brand, following 2018’s One Strange Rock and 2021’s Welcome to Earth.

Pole to Pole has yet to be given a premiere date