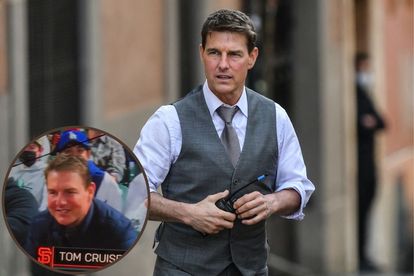 After Tom Cruise stepped out in a rare outing with his son, Connor at a baseball game in the United States over the past weekend, it is the Mission Impossible star’s different look that sparked conversations online.

The internet weighed in on whether Tom Cruise underwent cosmetic surgery as his face seemingly looked different at game two of the National League Division Series between the Los Angeles Dodgers and San Francisco Giants on Saturday, 9 October.

“What he do to his face, same doctor as Wayne Newton?” one social media user wrote on Twitter. “Tom has done something to his face or he has gained some weight. But that is our Tom!” others added in response to claims that it must be an imposter.

“Lakers fans easily recognise Tom Cruise and his son, Connor. The rest of the timeline is like, ‘Wait. Tom Cruise? Are we sure? Who’s that guy?’,” said another. “What the hell is going on with his face?? Is he having an allergic reaction??”

“Tom Cruise has either gained weight, or he has a face full of fillers. I’m going with the fillers,” another person wrote.

Others came to the actor’s defence as he is 59-years-old and still doing his own stunts.

“Surgery? Weight? Movie Role? Age?? Idk, he’s looked great for his age at 59 years old. Hard to believe so suddenly he looks this different. I mean, look at him from the set of MI7,” another person added with a photo of the actor on the set of the upcoming Mission Impossible.

“Listen I don’t like tom cruise at all (AT ALL), but I’m seriously sick of Twitter trashing people for their weight fluctuations. people are allowed to gain and lose weight, and it’s really nunya!!! stop being fatphobic!”

Earlier his year, Cruise was in attendance at Wimbledon in London, England with his latest Mission Impossible co-stars, Hayley Atwell and Pom Klementieff, the Euro 2020 final and the British Grand Prix.