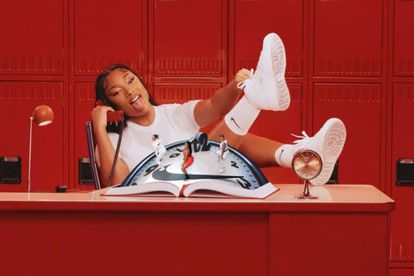 Megan Thee Stallion has hit out at “fake woke” critics on Twitter.

The 26-year-old rap star has hit back after Nike’s Thee Hottie Handbook – Megan’s new advertising campaign that focuses on mindfulness, was described as a “facade” and “b******t” by one Twitter critic.

In response to the ad campaign, @serenajupiter wrote on the micro-blogging platform:

“Stop following celebrities who speak of “Mindfulness” and “Vibes” constantly. It’s all a facade, especially considering their own musics frequency is in the gutter. See through the B*****t. Practice Discernment and Most importantly stop being so easily mislead!”

However, the Hot Girl Summer hitmaker was quick to hit back online. Megan insisted she’s trying to help her fans to feel good about themselves and upbeat about life generally.

“Constantly? The message of the video is although you might be going through a hard time it won’t last long… Y’all so fake woke on this app it’s ridiculous. I***f how YOU feel abt my music it’s obviously making SOMEONE feel good abt themselves,” said the rapper.

Megan – who has more than six million followers on Twitter – subsequently insisted she uses social media to keep up-to-date with the things that she enjoys and feels passionate about.

The chart-topping rap star – who has more than 25 million followers on Instagram – wrote:

“My explore page on Instagram is full of food puppies and make up.. Bc I keep up with what I LIKE”

ALSO READ: How it started vs how it’s going: Is Rami Chuene’s daughter on OnlyFans?