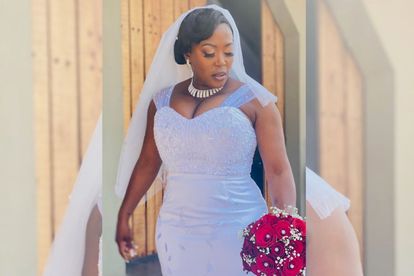 Former The Queen actress Rami Chuene, surprised her followers this morning when she revealed that she got married in a secret ceremony this past weekend (25 September).

The actress posted a picture of herself on her social media channels dressed in a wedding gown, and captioned the image:

“I also attended a wedding this past weekend.”

The controversial actress sent social media in a frenzy, as they thought that she was dressed for her character on Giyani: Land of Blood.

Tweeps only got convinced that the legendary actress got married in real life when her industry friends Dineo Langa, Somizi, and Loyiso MacDonald started congratulating her.

While her fans are happy for her, many are still wondering, who is the groom?

It is revealed that the actress made all her friends and guests sign NDA (Non Disclosure Agreements) about her relationship and the wedding ceremony as none of them, including the actress has revealed who her new husband is.

Also read:How it started vs how it’s going: Is Rami Chuene’s daughter on OnlyFans?

The 46-year-old actress was previously married to former The Queen actor Tshepo Desando eight years ago.

The actress filed for divorce in 2012 after the pair faced financial challenges in their marriage.

BuzzAfrica reported that the actress was miserable in the marriage as her husband was not supportive after the bank repossessed their cars and house.