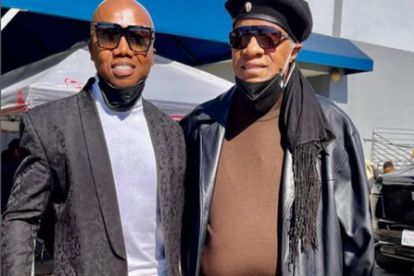 Tbo Touch first met Stevie Wonder in 2013 and the veteran singer-songwriter shared that Johannesburg was one of his favourite cities. Image via Instagram @iamtbotouch

Tbo Touch first met Stevie Wonder in 2013 and the veteran singer-songwriter shared that Johannesburg was one of his favourite cities. Image via Instagram @iamtbotouch

Former radio DJ and online radio station Touch HD owner Thabo Molefe, popularly known as Tbo Touch, has been in Los Angeles for some time now, rubbing shoulders with the who’s who.

The businessman played a round of golf with former skateboarder Matt Miller and furniture designer Colin Sonnichsen, as well as had a meeting with Warner Chappell Music president Ryan Press.

Tbo Touch also met with the legendary singer-songwriter Stevie Wonder. Sharing an image of them on Instagram, the former Metro FM radio presenter hinted at bringing the musician to South Africa for a live performance.

As per an Instagram post on Monday 1 February, Tbo Touch says he first met the Grammy award-winning musician in 2013. The two bonded over dinner at Nobu in New York, where Wonder mentioned that Johannesburg was one of his favourite cities.

The As hitmaker was due to attend Tbo Touch’s wedding in 2017 in the Cape Winelands, but the wedding was unfortunately called off.

The two met again in Los Angeles and Tbo Touch has now hinted at bringing Stevie Wonder to South Africa to perform.

“I’m convinced there’s a ribbon in the sky for all those South Africans who want to see you LIVE in concert,” wrote the businessman.

The former radio DJ visited New York before jetting off to sunny Los Angeles. He connected with his “spiritual father”, Bishop Noel Jones, and Press.

He also played a round of golf with former skateboarder Matt Miller and furniture designer Colin Sonnichsen at the Angeles National Golf Club, a golf course designed by Jack Nicklaus.

In July 2021, it was reported that the former Metro FM DJ will explore how arts businesses across the globe were affected by the COVID-19 pandemic.

“Vaccinating the Arts” is a three-part documentary that will focus on how the global arts industry failed to recover from the pandemic.

According to Tbo Touch, he hopes the documentary will highlight the importance of getting vaccinated so theatres can be full to capacity once again.

Sunday World reported that the documentary’s production team would kick off filming on 12 July 2021.

Filming for the documentary, titled Vaccinating the Arts, would take place across 42 different countries.

“For me it is not only about working with an international team, but it’s about teaching the world about the important of vaccinating so we will be able to gather and enjoy our social lives again.”

The release date was set for the end of 2021, but has been postponed.