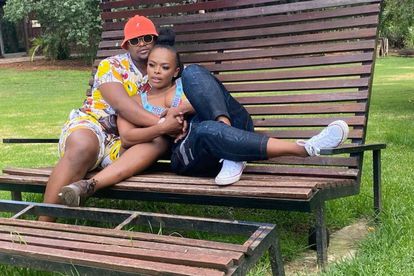 It’s Valentine’s Month and it seems love is in the air for two of Mzansi’s musicians. Former Idols SA judge Unathi Nkayi and soul muso Kaylow looked loved up in some images posted by him.

Some think the two might be romantically involved while others think the pair are just teasing a music video for their single Jola, produced by SNE Maungelo.

Musicians Unathi Nkayi and Kelello Sogoana aka Kaylow are two of Mzansi’s biggest talents. Though they have only collaborated on Jola released on 14 January, they have released some of the most notable songs in the country.

Kaylow’s The Soul Cafe, released in 2015, was one of the biggest tracks in Mzansi that year. One of Unathi’s biggest hits is a collaboration with Ladysmith Black Mambazo titled, Halo Sana (Buya Mama).

SNE Muango collaborated with Kaylow and Unathi on a new song titled Jola. The song is flying high on the Mzansi charts and has beat out amapiano hits Umlando and Asibe Happy on the Radio Monitor Charts.

On Monday 7 February, Kaylow posted images on Twitter of him and Unathi cozied up on a bench. The two matched outfits and both rocked bright tops. Kaylow accessorised with a peach bucket hat and sunglasses.

Are their lyrics “Se siya Jola” (We are dating), coming to life, or are they just shooting a music video?

Tweeps weighed in on the images but there were a few mixed reactions… Some believed they were shooting a music video for Jola, while others gave them their “stamp of approval”.

One tweep wrote: “I’m seeing it but I don’t believe it.”

Another wrote: “They are promoting a song.”

“Okay, this has to be my favourite celebrity couple.”

Unathi was also rumoured to have been with Prince Kaybee after the producer shared that they were working on music together. The Fetch Your Life hitmaker rubbished the claims that the two were romantically involved.

Kaylow has not been publically linked to a woman.