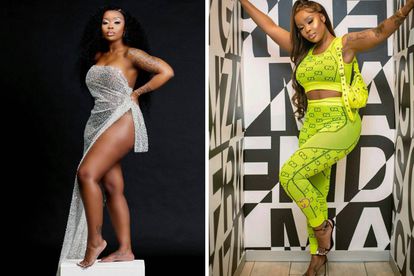 Sithelo Shozi has a brand new car, body, and a thriving career as a DJ. But according to reports, whilst the entertainer is living the “high life”, her mother is living in abject poverty.

The ex-girlfriend of Andile Mpisane is accused of neglecting her mother, who is reportedly living from “hand to mouth”.

SITHELO CLAPS BACK AT CLAIMS

This week, pics of a derelict home went viral on Twitter. In the post, Sithelo Shozi was named and shamed for leaving her mother to live in squalor, whilst she seemingly enjoys the lavish lifestyle as a celebrity.

The tweet read: “Africa’s richest slay queen Sithelo Shozi has been accused of neglecting her own mother. The mother is now renting 2 rooms in a rural area. This is a sad story of how much her mother is suffering whilst her daughter is living her best life”

But according to the star – who just returned from having a “mommy makeover in Turkey – the claims are rubbish.

Responding to the tweet, the mother-of-three posted several laughing-face emojis.

Becoming annoyed, Sithelo warned tweeps that she would resort to violence over the false claims. When one follower asked her to set the record straight in a sit-down interview with MacG on Podcast and Chill, Sithelo responded: “I don’t clear nonsense”.

Sithelo Shozi – and her star sister Ze – originally hail from the South Coast suburb of Umkomaas in KwaZulu-Natal.

Sithelo is not the only star accused of neglecting her family. Muso Kamo Mpela was recently accused of abandoning her mother, who according to celeb blogger Musa Khawula, is battling alcohol abuse

The controversial blogger shared a clip of a derelict home he claims the mother of the award-winning, globe-trotting star stays in.

Kamo previously told The Yanos in November 2021 of her “complicated” relationship with her mother.

She said: “Growing up mostly with my dad, I had to mother myself and also mother my siblings. I didn’t have that talk about periods and how to do my nails with my mom, I had to teach myself those things”.