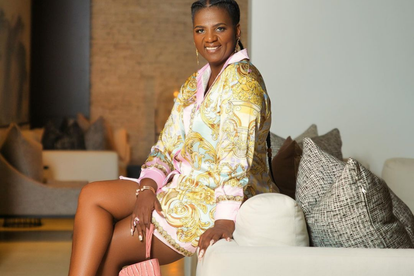 Shauwn Mkhize aka “MaMkhize” recently shocked South African soccer fans when she purchased Bloemfontein Celtic for a whopping R50 million. While many knew of her aspirations to get her existing team Royal AM to the Premier Soccer League, no one knew Bloemfontein Celtic was part of her plans.

KwaZulu-Natal businesswoman Shauwn “MaMkhize” Mkhize is in extremely high spirits and with R50 million to blow on a South African soccer team, who wouldn’t be in high spirits? Soccer fans across the country were left shocked when it was announced she was buying Bloemfontein Celtic on 14 August.

And now we see that the reality TV star was after one thing from the start, getting Royal AM, her soccer team, to the Premier Soccer League (PSL). Finally, her vision has been realised and of course, she is celebrating in style.

She took to Instagram on 14 August to celebrate Royal AM’s big move by writing:

“From our mouths to God’s ears. PSL ROYAL AM here we come. 🥳💃🏽🎉🙏🏽….I love my team 🙏🏻🙏🏻for always making me feel special I am humbled ❤️❤️❤️❤️❤️My sis @nozipho_ngubo I love you for this ❤️❤️❤️❤️
Trust his timing. #RoyalAMNation #MyWorldMyRules #Kwamamkhize,” she wrote.

Of course, her many fans and supporters were not going to let this win slide without sharing heartwarming congratulatory messages. Many of them complimented MaMkhize for continuously reaching for the stars when it comes to her hopes and dreams: