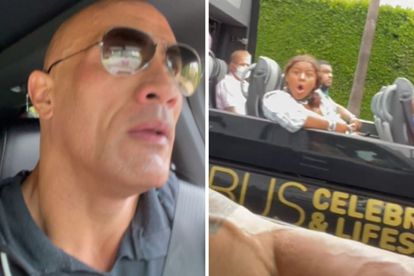 Hollywood actor, Dwayne ‘The Rock’ Johnson recently surprised a tour bus while on a morning drive in South California, causing fans to go into a frenzy.

According to Unilad, if there was ever a better sight to see when staring out the window of your car, while stuck at a red light, then this is one of them. In the video, which he shared on his personal Instagram account, he approaches the tour bus and can be heard saying: “Well this is kind of funny, there’s a tour bus here, that always tours through my neighbourhood.”

Upon pulling up next to the bus, The Rock performs the best one-liner possible, saying: “Hey you guys know where I can find The Rock?”

He then reassures them that he’ll wait, before asking how everyone is doing on the bus. After greeting the crowd, he pulls away in his vehicle laughing, saying “ah well, that was fun. It was a good way to start off my Saturday.”

The video soon went viral. “Dude. Imagine needing a feel-good moment on a Saturday morning so you roll down your window as you pass a bus full of people and BOOM! Instant rockstar status. I’m glad he uses his powers for good is all I’m saying,” said one Reddit user. “Him driving away and enjoying the moment then figuring out the rest of his ‘To Do’ list like every other dude is just the best,” said another.

What’s next for The Rock

The 49-year-old actor recently finished filming on Black Adam while another movie, Red Notice, is currently in post-production with a release date scheduled for later this year.

His latest movie to be released in cinemas is Disney’s Jungle Cruise that he filmed with Emily Blunt.

As for his fitness routine, he has been spotted out and about in his workout clothing to the delight of fans everywhere. He also shares frequent updates on his Instagram account.