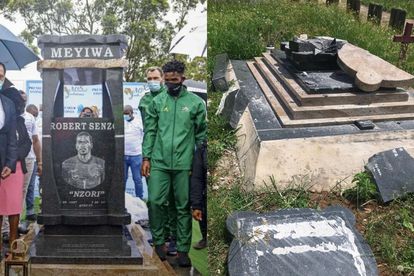 The tombstone of former Bafana Bafana captain Senzo Meyiwa was broken down and vandalised in 2020. Meyiwa passed away in 2014 and was buried in Clermont, Durban after he was gunned down in Vosloorus, Gauteng.

According to Daily Sun, the South African Football Association (SAFA) in KwaZulu-Natal will rebuild Meyiwa’s tombstone. SAFA spokesperson Kwenza Ngwenya said there were plans in place to renew the tombstone but they were delayed due to COVID-19.

ALSO READ: ‘The world will hear my voice’: Kelly Khumalo opens up about Senzo trial

In December 2020, Bafana Bafana shared photos of Senzo Meyiwa’s vandalised tombstone adding that it had only been built two months prior.

“Former Bafana Bafana goalkeeper and captain Senzo Meyiwa’s tombstone has been vandalised, two months after it was unveiled in Clermont, Durban.”

TAKE A LOOK AT THE SHOCKING PHOTOS HERE

Speaking to Daily Sun, Kwenza Ngwenya said the KwaZulu-Natal based tombstone company visited Senzo Meyiwa’s gravesite but the recent floods in the province came in the way.

On keeping the tombstone secure, Ngwenya said: “We will try to fence it in a way that thugs won’t have access to it. It cost SAFA R160 000 for the tombstone alone, excluding the cost of the unveiling.”

“For it to be vandalised like that, days after the unveiling was shocking. But this time we will try all the means to protect it.”

Meyiwa’s brother Sifiso said: “That will be dignity to my brother. Let’s just pray that nothing disturbs the project again.”

ALSO READ: ‘Copy and paste’: Senzo Meyiwa’s daughters are all grown up [photos]

In an interview with Relebogile Mabotja on Friday 20 May, Kelly Khumalo said the “noise” around Meyiwa’s trial had “nothing to do with her”. Khumalo was one of the few people present when Meyiwa was shot.

“Whatever feelings they have towards me. I feel like it’s a projection because this is not the only case that has been a failure when it comes to the justice system.”

Meyiwa’s trial is set to resume on Monday 30 May.