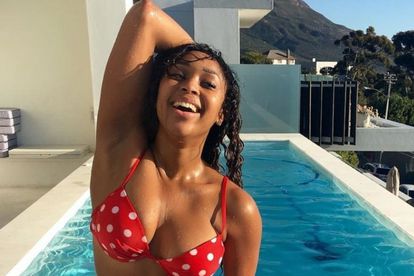 Minenhle “Minnie” Dlamini clearly has no love lost when it comes to her estranged husband Quinton Jones. The media personality has already found a “TV husband” and doesn’t appear to be missing anything from her failed relationship with Mr Jones.

Many of her fans love seeing her smile again and have shared heartwarming comments under her post. Of course there were also a few raised eyebrows around the fact that she appears to be working hard to seem happy.

The last few months have been pretty hectic for Soccer Zone presenter Minnie Dlamini whose personal life has been sprawled out for everyone to dissect on social media.

The star shook Mzansi when she announced that she was splitting from her husband of four years, former US sports star Quinton Jones.

The pair, who share an almost 2-year-old son Netha Jones, are currently negotiating the term of the divorce but are rumoured to have hit a bump in the road.

A few months after the announcement, rumours started flying that Minnie had cheated on Quinton but this is something she has vehemently denied.

Meanwhile, she seems to be moving on and has shared a string of social media posts showing off her physique and happy-go-lucky attitude.

Her latest post is dedicated to her Homeground co-presenter Lungile Radu.

Taking to Instagram on Wednesday this week, Minnie praised her TV husband and brother for making her work life so colourful.

“I’ve been working with this multitalented powerhouse for about 4years. I always joke and say he’s my TV Husband

But in all honesty he’s my big brother who has taught me so much about this business, and has no issue to let me shine,” reads part of her post.