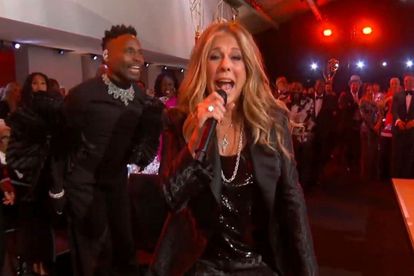 Rita Wilson raps at the Emmys
Image via Twitter
@cbs

Rita Wilson raps at the Emmys
Image via Twitter
@cbs

Is Rita Wilson the most talented member of her family?

According to tweeps that question is up for discussion after the Hollywood actress delivered an unexpected yet totally entertaining performance at the Emmys on Sunday night.

Rita Wilson – who is wife to actor Tom Hanks and mom to rapper Chet Hanks – had the Emmys audience on their feet after she rapped a few lines during the opening monologue which featured a star-studded singalong from the likes of Cedric The Entertainer, LL Cool J and others.

Rita rapped her heart out over the tune of late artist Biz Markie’s hit track Just A Friend as actor Billy Porter served as her impromptu back-up dancer in the background.

And many agreed that the 64-year-old star was a better rapper than her 31-year-old son.

Others weren’t so kind and cringed at the Hollywood veteran.

“Rita Wilson should stick to her day job”, claimed one tweep.

Another delivered a particularly low blow.

“Rest in peace, Gabby Petito and be glad you don’t have to live in a world where Rita Wilson raps”, they tweeted.

Meanwhile Rita Wilson recalled landing on the Emmys worst-dressed list in 2010 during a red carpet interview.

The star – who went for a glamorous sparkly black suit from Tom Ford on Sunday night – reminisced over her fashion fail over a decade ago, which was described as “droopy, frilly, shapeless creation.”

She told Karamo Brown: “TIME Magazine named my dress top 10 along with Lady Gaga’s meat dress…It’s very hard to get the top 10 of any list so I’m embracing it. I consider it a victory.”

Proving she can be a “cool mom”, the actress also referenced Jay Z with the lyric: “I don’t pop Molly, I rock Tom Ford.”