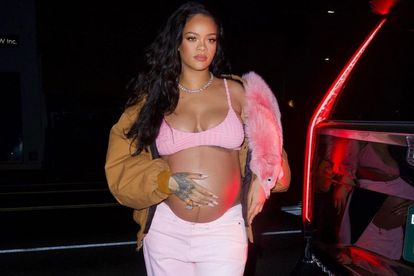 Rihanna has had tweeps debating if her salty sea water fruit fetish is safe or not.
Image via Twitter
@rihanna

Rihanna has had tweeps debating if her salty sea water fruit fetish is safe or not.
Image via Twitter
@rihanna

Apart from the drama surrounding her baby daddy, Rihanna has been enjoying some much needed R&R in her home country of Barbados.

With her belly out for all to see, the pop singer has been out and about on what many would consider a “babymoon”.

Rihanna is expecting a baby with boyfriend; rapper A$AP Rocky, who joined her on the trip this week.

In many of the paparazzi pics taken of Rihanna, she is seen enjoying the sand and sea of the island.

But one set of pics have some fans grossed out; the bikini-clad star is seen dipping her fruit into the ocean, before eating it.

According to Rihanna herself, the custom is common in Barbados. She told Vogue magazine in a pregnancy exclusive: “… because in Barbados we take our fruits to the ocean and soak them. Trust me, it really is a thing.”

But whilst many understood the nature to add a touch of salt to a sweet fruit, others stated that the ocean was an “unhygienic” place to do it.

TheGInLasagnaW2: “That’s not healthy at all, I understand that’s a Caribbean thing but that’s very risky. It’s scary how a lot of y’all don’t know about bacteria in sea water and fresh water. Y’all should take an environmental microbiology course. It might open your eyes to a lot of these things”

@blvckintell: “Man not with flesh-eating bacteria getting worse on the shorelines due to climate change, no way”

Others defended Rihanna’s age-old practise, stating it was an “old school method” of consuming food.

According to medical journals, virus and bacteria like cholera, salmonella, E. coli, norovirus, and rotavirus can be found in contaminated waters around the world.