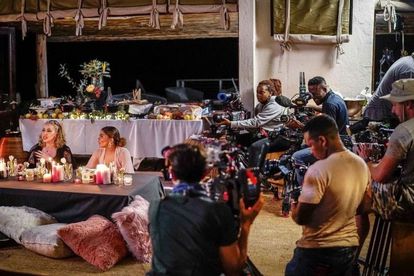 ‘RHOD’ slammed for being scripted. Image via Twitter @PhilMphela.

‘RHOD’ slammed for being scripted. Image via Twitter @PhilMphela.

Entertainment commentator Phil Mphela shared behind-the-scenes photos of the cast of The Real Housewives of Durban (RHOD) and said that the show has to be scripted – via a tweet on 22 April.

Well known entertainment commentator Phil Mphela shared behind-the-scenes photos of the RHOD. He went on to say that reality television is scripted and therefore has to be planned and controlled.

“Look at how many people are in the room when they shoot #RHODurban. This is what’s meant by; reality tv, like all tv productions, is scripted,” he wrote.

“You may not be told what to say, but the “scene” has to be planned & controlled. Can’t be “real” with these many ppl watching you,” he continued.

Phil stated that he was not saying they were given scripts but there is a structure behind it.

“By the way, if I’m not clear … I’m not saying people are given scripts like actors on set. Thought that’s obvious, but this is Twitter. One has to put it in grade 3 terms. Television is about structure (and story telling) so it’s not viable to just point cameras ????,” he wrote.

THE HIGHLIGHTS OF ‘RHOD’ SEASON TWO

RHOD is one of the most loved South African reality series. Showmax released a new episode every Friday and RHOD would subsequently trend on Twitter.

The series was filled with drama. So, here are three of the most popular talking points of season two.