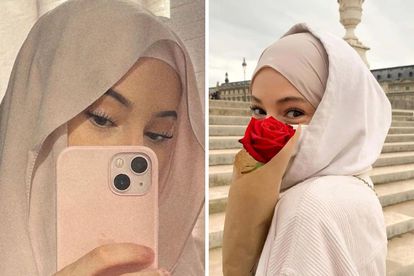 Rima Edbouche – wife of French player Ousmane Dembele – is one of the Muslim WAGS taking the World Cup by storm.
Images via Instagram
@rima.ebc

Rima Edbouche – wife of French player Ousmane Dembele – is one of the Muslim WAGS taking the World Cup by storm.
Images via Instagram
@rima.ebc

When it comes to football WAGS, we’re used to seeing petite blonde English women take centre stage. But with the Fifa World Cup being hosted in Qatar for the first time, the wives of some of the biggest Muslim players around the world are getting their time to shine.

In 2010, Qatar was announced as the 2022 World Cup host – the first-ever Muslim and Arabic country to host the football tournament

ALSO READ: WC: English WAGS warned not to show off figures in Qatar

The country also has strict guidelines based on Sharia legislation – or Islamic law.

Visitors to the country have also been issued with a code of conduct that dictates public decency, including a modest dress code.

Meanwhile, football fans have been turning their attention to the partners of some of the world’s most prominent players, including those in the Muslim faith.

Here are 6 Muslim WAGS taking the World Cup by storm…

The Moroccon-born woman is a TikTok personality and has a baby girl with the soccer star.

Pauline is a social media content creator and mom of two boys, Isaac and Ismael.

Sara is a model and TV personality, who is currently expecting the couple’s first child.

ALSO READ: FIFA World Cup 22: What is the official song?

The Instagram model is supporting her Socceroos husband for his second World Cup appearance.

The social media star shares a mutual Kosovo-Albanian background with her husband. The couple has two daughters.

Hiba is a Spanish actress known for her role in the telenovela El Principe.

The glamorous World Cup WAG and her husband were recently featured as the cover stars for Vogue Arabia.