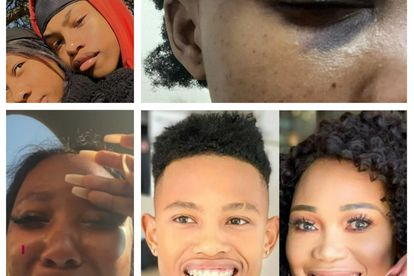 Actress Sonia Mbele’s son Donell has been accused by a woman claiming to have been his girlfriend of ‘abuse and rape’. Images via Instagram: @k.ediii @thee_sonia

Actress Sonia Mbele’s son Donell has been accused by a woman claiming to have been his girlfriend of ‘abuse and rape’. Images via Instagram: @k.ediii @thee_sonia

Actress and producer Sonia Mbele’s son Donell Mbele has been accused by a woman named Reokeditswe on Instagram of allegedly physically abusing and raping her. It is not clear whether she is still his girlfriend or whether she has left him due to her allegations of gender-based violence (GBV).

According to Reokeditswe, the child star — who was Queen Moroka’s son on the old Generations –, reportedly assaulted her when she confronted him about cheating on her.

The South African reached out to Sonia and by the time of publishing, the actress had not responded to the allegations levelled against her son.

REOKEDITSWE: ‘YES, I AM OPENING A CASE’

The 21-year-old detailed the alleged abuse in their relationship on her Instagram Stories on Tuesday 22 November, claiming that Donell assaulted her on four different occasions.

“This man abused me on four different occasions. Each time, worse than the last. And on the most recent time, I wanted to [l]ay charges but was conflicted by so many things. Firstly, my love for him. I put him before myself and all I thought about was his future and how selfish I’d be to ruin it,” she said.

“Secondly, his mom is [a] public figure, so I didn’t want to drag her name into it. But after today, he hit me, suffocated me and dragged me around his house, then laughed in my face. I realised this man isn’t going to change and the man I feel in love with, just doesn’t exist anymore. I appreciate the love and support you all are giving me.

“So now I need to put myself first. And for those asking, yes I am opening a case. It was the last thing I expected,” she added.

Take a look at screenshots from her Instagram Stories:

DONELL MBELE: ‘I ALMOST KILLED YOU’

Reokeditswe, who is rumoured to be Donell’s “baby mama”, also shared a screenshot of messages between the two of them in which he refers to her as “Omphile”.

Donell appears to be owning up to what he did to her and tells her that he cannot allow her to be with him after his actions.

“I almost f**ing killed you. I almost raped you. This isn’t a man you deserve to be with…love isn’t supposed to be toxic, especially to the point where I almost kill you,” Donell is alleged to have said.