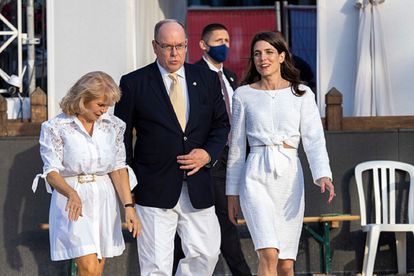 According to The Mail, the prince attended the 15th international Monte-Carlo Jumping event, which is part of the Longines Global Champions Tour of Monaco, alongside his niece Charlotte Casiraghi, who has previously competed in the event.

It seems that Princess Charlene is still in South Africa after undergoing “multiple, complicated” procedures after contracting an ear, nose and throat infection in May, while on a solo visit to the country, while Albert remains in Monaco with their six-year-old twins Jacques and Gabriella.

The princess has not been in Monaco since January. Luckily, her children and husband (who is facing another paternity suit over a love child born in the early years of their relationship) visited her in June.

Before she contracted the infection, the former South African Olympic swimmer returned to South Africa in order to raise awareness about rhino poaching, according to SA People. Photos on her Instagram page, posted on Thursday, 20 May 2021, show the 43-year-old princess out in the bush with her arms around an anesthetised rhino while its horn is being cut off.

On 1 July, Princess Charlene shared a video documenting her royal wedding to Prince Albert on her official Instagram page after the couple spent their 10th anniversary apart.

In a statement, Charlene explained she would not return to her family in time for the anniversary, saying that this is the first year that she will not be with her husband on their anniversary.

“It is difficult and saddens me. However, Albert and I had no choice but to follow the medical team’s instructions even though it is extremely difficult. He has been the most incredible support to me. My daily conversations with Albert and my children help immensely to keep my spirits up, but I miss being with them. It was special to have my family visit me in South Africa, and it was truly wonderful seeing them. I can’t wait to be reunited with them.”

According to Page Six, Charlene was born in Zimbabwe in 1978 and later became a longtime competitive swimmer who was on a women’s medley team that came in fifth at the 2000 Summer Olympics.

That same year, she met Prince Albert but the two didn’t go public as a couple until six years later — during a tumultuous period in Albert’s life. In 2005, his father, Prince Rainier, died and Albert was enthroned as the new ruler of Monaco. But less than a week before, Albert had been forced to admit that he had fathered an illegitimate son, Alexandre, with Nicole Coste, a flight attendant from Tongo whom he had met on an Air France jet.