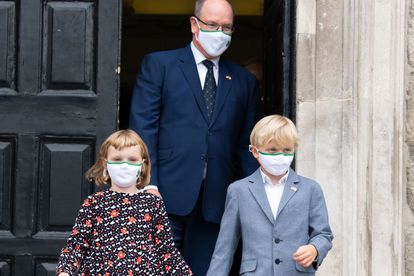 Princess Charlene’s husband Prince Albert and their children; twins Gabriella and Jacques are seen during a royal engagement in Ireland, days after visiting her in South Africa
Image via Facebook
@palaismonaco

Princess Charlene’s husband Prince Albert and their children; twins Gabriella and Jacques are seen during a royal engagement in Ireland, days after visiting her in South Africa
Image via Facebook
@palaismonaco

While Princess Charlene lay in a KwaZulu-Natal hospital after suffering a medical emergency last week, her husband Prince Albert and their children jetted out of the country…

The South African-raised royal, who has been in the country since earlier this year, was rushed to a Ballito hospital last week after she “suddenly collapsed”, according to Monaco palace officials.

The former Olympic swimmer was suffering from complications of an ear, nose and throat infection which worsened while on a charity endeavour in the country.

While Charlene was still in hospital, Prince Albert and the children he shares with the 43-year-old princess — twins Gabriella and Jacques — flew thousands of kilometres away to Ireland to attend several official engagements on Friday 4 September.

Late last month, Princess Charlene’s family joined her in South Africa after she stated that she was unable to fly home due to her sinus infection.

Charlene and Albert were seen embracing in pics posted on her Instagram account, whilst she also had an emotional reunion with her children, whom she has not seen in months.

Whilst in South Africa, the heir to the Monaco throne attempted to do some damage control following longstanding rumours of a split in his marriage.

He told People magazine of his wife: “She’s ready to come home. She’s jokingly said that she’s ready to stowaway on a ship to come back to Europe,

He added: “I know she’s said possibly ‘late October’ but that was before this most recent round of appointments.

“I’m pretty sure we can cut that time frame a little short.”

But Charlene’s latest health setback has placed a spanner in the works of the family’s plans to reunite in their Monaco home.

According to the palace, Princess Charlene is on the path to recovery

“Her Highness is being closely followed by her medical team who say her condition is reassuring.”

Last month the blonde beauty underwent a four hour procedure – the latest in a series of surgeries to correct complications of her sinus infection.