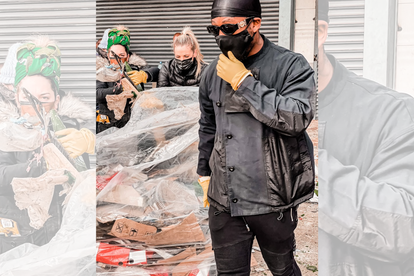 Prince Kaybee is obviously very touched about everything that has happened in KwaZulu-Natal and Johannesburg over the past week. The South African DJ opened up about his frustrations around other Mzansi celebs who haven’t done anything to help.

No money to protect

On Thursday evening this week, the Fetch you Life DJ headed to Twitter to basically throw shade at his fellow local celebrities.

In his post, Kaybee says that many celebrities have used the excuse, they are “protecting their careers” to stay silent over the country’s recent unrest.

While incidents of looting are no longer being reported, many places in South Africa are dealing with the aftermath of the looting. And of course, a hands-on approach to recovery is needed by anyone with the ability to help.

This must be why Kaybee accused other prominent South African figures of hiding behind their status. In the same breath, he blatantly accused some celebs of faking their wealth.

Many South Africans truly believe that Kaybee is speaking for the people. A lot of his followers were in the comment section thanking him for not only raising his voice but also for actually taking a broom and addressing the problem head-on.

“I salute you, my Brother, you did not support looting with lame statements and videos but went for a good course waiting for people to clean my kasi and I’m joining

Not everyone is siding with Kaybee though

While he received high praises for his comments, there were a few people who were not buying what Kaybee was selling.

Some folks believe that the musician is simply shopping for clout – especially since he shared snaps of himself armed with a broom and ready to clean the spaces that looters left in a complete mess.

“Kabelo stop acting as if you care! You know exactly; you only tweet this for likes. It is not genuine. Deep down; you don’t give a f%$#,” wrote @Mongezi_Maonga