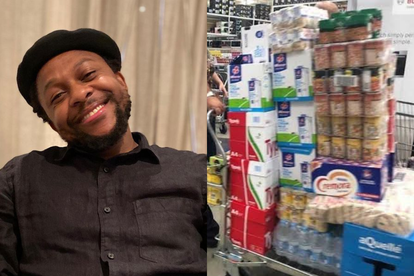 Mbuyiseni Ndlozi of the Economic Freedom Fighters (EFF) tweeted earlier on Friday 16 July about people who are panic buying.

A clearly agitated Ndlozi has slammed those who rushed to stores to stock up on various necessities while leaving shelves bare. Many of his followers appeared to be equally frustrated.

Ndlozi on looters and panic buying

In an angry tweet, the EFF MP condemned the behaviour of people who are stockpiling food while other people are met with empty shelves. In the same tweet, Ndlozi said that looting and stockpiling are the same. This is because when people stockpile and panic buy, other people are left with nothing.

In the same breath, Mbuyiseni criticised the rich. According to him, those who can afford to stock up on groceries and other items needed in a household, are depriving the poor of buying the bare minimum.

“Panic buying is equal to looting! The rich using money to deprive the whole market of already little supplies!” reads his tweet.

Tweeps are left with mixed views

A lot of the controversial EFF member’s followers appear to agree with him. Many comments were made in the comment section by locals who have hit the shops and noticed there was not much to buy.

One guy shared how he was unable to buy a single can of baked beans while another tweep shared how a shop near him was completely void of toilet paper.

Others have however rubbished Ndlozi’s tweet and questioned his PhD qualification. See some of their tweets below:

“Dr Ndlozi I noticed the same yesterday when I couldn’t find a tin of beans. What was more NB was that the rich buy toilet paper a lot, both tissue and printing paper were gone.”

No reason at all to panic buy

Meanwhile, Business Insider has reported that there is really no reason for people to be panic buying. According to BI, retailers have come out to assure South Africans that there is a sufficient supply of food stuff and other grocery items. The only reason why people are panicking is that many have resorted to panic buying.

“If people in Joburg would just stop panic buying, you wouldn’t be seeing those photos,” said an executive at a major retail chain, referring to various snaps showing empty shop shelves.