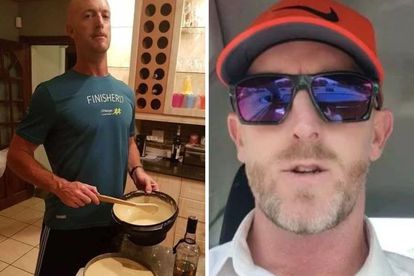 A TikTok video belonging to a ‘Matthew Booth’ has mocked the drama surrounding the soccer star’s cheesecake escapades.
Image via Instagram
@matthewboothza

A TikTok video belonging to a ‘Matthew Booth’ has mocked the drama surrounding the soccer star’s cheesecake escapades.
Image via Instagram
@matthewboothza

A TikTok video – supposedly shared by a TikTok account belonging to “Matthew Booth” – has raised eyebrows online….and it has everything to do with the decadent dessert cheesecake!

The ex-Bafana Bafana player has been dragged on social media after his wife Sonia accused him of cheating on her with a woman named Bongani Moller.

And the clip clearly mocks the topic of cheesecake, which has been a trending topic on social media.

The TikTok video features a clip of US rapper Future expressing his love for cheesecake. Interestingly, the muso is widely known for his philandering ways.

He says: “I love cheesecake late at night. Cheesecake will top it off before you go to sleep”.

When the interviewer asks the star what he loves about the dessert, he quips: “It’s sensational”.

But one look at the account, and it’s clear it does not belong to Matthew Booth. Instead, it appears an opportunist created a parody account in the wake of the allegations.

It’s unclear if the real Matthew Booth has a TikTok account.

WHAT DOES CHEESECAKE HAVE TO DO WITH ANYTHING?

If you’ve been living under a rock for the past few days, you’re probably wondering what cheesecake has to do with Matthew Booth.

Well, according to wife Sonia, her spouse allegedly made one for his “mistress”, who then shared it with her own husband Klaus Moller and their two children.

Sonia documented the experience on social media. She even went as far as to fetch a Tupperware the cheesecake was placed in from the home of Bongani Moller.

Here are a few noteworthy videos….