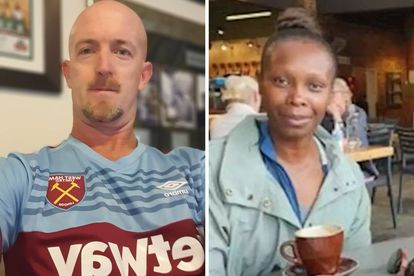 Matthew Booth has denied allegations made by wife Sonia that he had an affair with Bongani Moller.
Image via Twitter
@matthewboothza/
@soniaboothza

Matthew Booth has denied allegations made by wife Sonia that he had an affair with Bongani Moller.
Image via Twitter
@matthewboothza/
@soniaboothza

The retired Bafana Bafana player vehemently denied having a romantic relationship with the woman, despite Sonia sharing “receipts” on her Instagram account.

In a statement posted on his Twitter account, Matthew Booth distanced himself from claims made by his wife Sonia.

This week, the father-of-two was dragged through the mud by his spouse. In a series of posts, Sonia shared “proof” of her suspicions in several social media posts.

But the athlete claims the posts are nothing more than “an intention to tarnish my name”.

The statement read: “It is the utmost sadness and disappointment that my wife Sonia Booth resorted to airing these unfounded allegations on all platforms with an intention to tarnish my name without discussing them with me, and without considering the damage that these allegations will cause, especially to out minor children who are in the middle of their final exams and to the Mthombeni-Moller family.

He continued: “The matter has been handed over to my attorneys who have been instructed to vigorously take the necessary steps to claim the appropriate relief. I will leave this to the legal system and let the truth prevail in due course.

Matthew Booth then seemingly apologised to Bongani Moller, as well as his sponsors for the embarrassment.

He added: “I would like to appeal to Mrs Mthombeni-Moller, the corporates and sponsors who have partnered with the Booth Trust for the advancement of soccer development initiatives not to allow this personal matter to deter the good work that’s being done, and that which lies ahead.”

ALSO READ: Matthew Booth Exposé: A list of Celeb affairs that had us shook

As was expected social media users had plenty to say about Matthew Booth’s choice of words. Many tweeps were annoyed that the husband and father denied the alleged affair, despite “proof” online.

Others claimed that he was trying to save face in front of his alleged mistress; Bongani.

@leigh_fusion: “You weren’t worried about your kids and consequences when you had an affair and quite publicly too! Now that you’ve been caught, your wife must keep quiet? YOUR affair caused this. Not your wife. You don’t get to control the consequences”

@_Tlale_: “Now you are concerned about children when you prioritised your side on his birthday? Where was this consideration on the morning of the 4th?”

@noziphomash: “The fact that you are defending Bongani and not your wife says a lot”

@Zinhleputinn: “Basically you are taking the side chick’s side sir”

@porshe418: “Are the sponsors and partners of Booth foundation aware that if you can spend your own son’s money on a side,  their money towards the foundation means absolutely nothing to you?”

@AmukelaniCoza: “Setting your lawyers on the mother of your kids while protecting your concubine? Its curtains…Sonia must just move out of this kindergarten marriage”