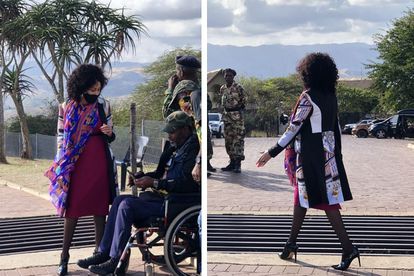 Twitter users took to social media to question the minister’s dress choice and high heels for her Nkandla outing.

According to TimesLive, Sisulu said she and others from the ANC had been “deployed” to meet Zuma at Nkandla and “make sure everything is in order”.

This comes after Zuma was sentenced to 15 months in jail after the Constitutional Court ruled he was guilty of contempt of court. Since then, Zuma supporters gathered outside Nkandla in support of the former president.

Zuma has since applied for a stay of execution of the order for his arrest on Sunday, 4 July 2021. The Constitutional Court will now hear Zuma’s rescission application on Monday 12 July 2021.

“Earlier today we met with former president Jacob Zuma,” Sisulu tweeted on 4 July. “We have been deployed here. Our job is to make sure everything is in order because ultimately the people who are here [at Nkandla] are members of the ANC so we have a direct responsibility,” she said.

Sisulu later told City Press that the former president has been welcoming towards the NEC members and they [Sisulu and ANC NEC member Tony Yengeni] informed him that they were just in Nkandla to ensure that things “were going smoothly”.

But now, Mzansi is wondering why Sisulu came dressed as if for the Durban July which also took place this weekend.

“Ziyi Durban July, was yesterday,” said Mafu-Z on Twitter. “What’s this now? The country is in the middle of a crisis and you think it’s time for Instagram? Do you take South Africans for fools?” said Justin Reinhardt Henry.

Others questioned how Sisulu was able to navigate the terrain (and the cattle grid) at Nkandla: