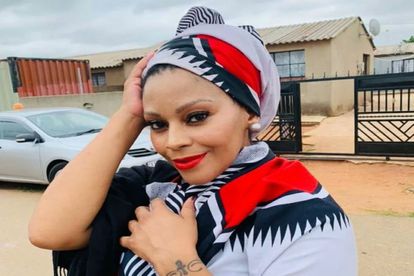 Generations:The Legacy actress and sangoma Letoya Makhene is accused of overcharging her clients who would like to consult her traditional healing services.

The mother of four had a heated exchange with her followers on Instagram when she updated them about the recent developments in her practice.

The actress announced that she’s now offering virtual consultations due to the COVID-19 lockdown restrictions and the increasing demand for her services.

The heated exchange between the singer and her followers began in the comment section. According to her website, the actress charges R1000 for an hour.

One follower said she couldn’t believe people paid so much money just for the actress to throw bones for them. To which Makhene replied:

“Wow. You actually said that out loud. That’s the problem with you people. You will gladly pay this amount to sit in a coffee shop with an ‘intuitive’ to give you a reading that will not even shed light on your life in the way that we sangomas will.”

“But you have the nerve to say ‘only for uphosa amathambo’. Sies. La re nyatsa (you look down on us). My time is precious and if you want it and my dlozi’s attention… pay for it!”

This is not the first time the actress had to defend herself.

She opened up about being a “proud queer woman” and detailed the obstacles she faced in her path.

“People who have absolutely no understanding of even their own journey and where it is taking them have chosen to play God, and point fingers at me.”