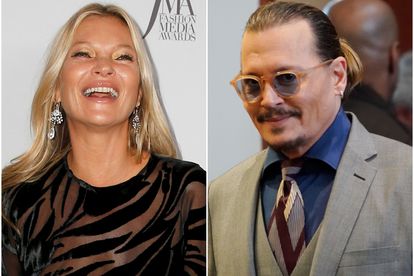 Kate Moss is set to testify in support of her famous ex-boyfriend Johnny Depp amid his defamation trial against ex-wife Amber Heard.
Image by Steve Helber, Dominik Bindl/AFP

Kate Moss is set to testify in support of her famous ex-boyfriend Johnny Depp amid his defamation trial against ex-wife Amber Heard.
Image by Steve Helber, Dominik Bindl/AFP

Kate Moss is expected to set the record straight on rumours she was the victim of an assault at the hands of her famous ex-boyfriend Johnny Depp.

This, during their highly publicised romance in the 90s.

The supermodel has been called in as a rebuttal witness in the defamation trial between Depp and his ex-wife Amber Heard, claims Fox News. Earlier this month Heard hinted at rumours surrounding her estranged husband’s past romance with the British beauty industry star.

Amber and Johnny are embroiled in a messy $100 million defamation case in the Fairfax, Virginia Court. The former Pirates of the Caribbean actor is suing his ex-wife over claims she made in a Washington Post op-ed . In it, she claimed to be a victim of abuse during their two-year marriage. In return, Amber is counter-suing Johnny after his legal team labeled her claims an “elaborate hoax”.

As a rebuttal witness, Kate Moss will be called in to counter the claims made by Amber Heard earlier this month. The British fashion icon, 48, will testify via video link on Wednesday in the Fairfax, Virginia, courtroom, claim the New York Post.

This, after Amber Heard, referred to a rumour surrounding a stairs incident between Johnny Depp and Kate Moss.

The Aquaman actress used this as a means to justify hitting the actor during an argument in March 2015. Testifying about that day, Amber claimed she feared her partner would push her younger sister Whitney down the stairs in a fit of rage. She said: “I instantly thought of Kate Moss and the stairs, and I swung at him”.

Amber appeared to be referring to an unverified rumor that Johnny once pushed Kate down the stairs during their relationship. The rumour spread after Johnny Depp was arrested on 13 September 1994  for criminal mischief after allegedly trashing his New York hotel room.

People magazine claims that upon arrival at The Mark Hotel, police found Depp “in a state of possible intoxication” and Moss “uninjured”. Bizarrely, Depp claimed the damage was done by an armadillo that  “popped out of the closet”. The armadillo was never found.

But rumours suggested that Depp had attacked Kate Moss after she allegedly confronted him about cheating on her. The rumours further claim that Depp allegedly pushed Moss down a flight of stairs during the alleged attack.

Neither Johnny nor Kate have ever commented on the rumours.

WHAT WILL KATE MOSS SAY?

All eyes will be on Kate Moss this week as she takes to the stand in support of Johnny Depp, whom she dated from 1994 to 1997. But according to insiders, the model will reveal a different story to the one mentioned by Amber Heard.

New York Post sources claim that sources revealed to them that Johnny Depp actually “caught” Kate Moss after she slipped on a staircase whilst in Jamaica.

The source told the publication: “She was wearing flip flips and she slipped on the last two stairs. Johnny caught her and tended to her. Johnny pick up Kate and carried her – this was hardly Amber’s scary interpretation of events”.

If Kate Moss debunks the rumour, she will discredit Amber Heard and her sworn court testimony.

Whilst Kate Moss and Johnny Depp’s romance was portrayed as glamorous, it was not without its rocky patches. The couple was known for their heated arguments and for trashing hotel rooms together.

But despite the rumours surrounding their breakup, Kate Moss had nothing but praise for the actor.

She told Vanity Fair in 2012 about her relationship:  “There’s nobody that’s ever really been able to take care of me. Johnny did for a bit.

“I believed what he said. Like if I said, ‘What do I do?’ he’d tell me. And that’s what I missed when I left. I really lost that gauge of somebody I could trust.”

Johnny Depp also expressed his regret after their split. “I have never got that emotional over a woman before,” he said in a candid interview with HELLO! magazine in 1998.